James Armbrister is part of a Bahamian family.

James Jacob Armbrister was probably the son of John and Mary Elizabeth Armbrister - residents of South Carolina, East Florida and the Bahama Islands. He was born in Nassau, Bahamas 26 October 1762, and his birth and baptism record at Christ Church may represent the earliest Armbrister record in the Islands.

James' parents resided in South Carolina in the late 1750s and there are records that note their presence: a renunciation of dower by Mary Elizabeth Armbrister in 1758, the loan of 260 pounds in 1759 to Andrew Walser by John Armbrister, and the baptism of son, John Melchior Armbrister, in St. Philip's Parish, Charleston, in 1760.

By 1762, John, Mary Elizabeth, daughter Elizabeth, and John M Armbrister were residing in the Bahamas. It is not clear how long they stayed before purchasing a house and lot in East Florida in 1782 (an investment by Elizabeth Armbrister Mason?) for which they submitted a Loyalist claim.

Notwithstanding a gap in records, James Jacob and John Melchior Armbrister married in the Bahamas and spent the rest of their lives there.

James Jacob Armbrister married three times: first to Mary (Mullins?) about 1789; second, to Martha Demeritt at Christ Church, Nassau, 2 May 1792; and third, to Mary Dorsett, in the summer of 1823, at St. Matthew's Anglican Church, Nassau.

The great tragedy of James Armbrister's life was the execution of his son, Robert Chrystie Armbrister, by General Andrew Jackson 3 May 1818 - which was contrary to the sentence imposed by a court martial - during the First Seminole War in Florida. It was an event that remains one of the most notorious in the annals of American military justice.

James Armbrister's Memorial to the Governor of the Bahamas regarding his son's death, dated 29 June 1818, reads in part:

" ..Some short time since, your memorialist's said son, when on a visit to the Floridas, as a passenger in a small trading vessel from these islands, certainly on this last occasion without any military commission or appointment of any kind which your memorialist is aware of, was (as your memorialist with the deepest pain, has lately learned by public accounts from different quarters) seized upon at his Catholic majesty's fort St. Marks, by a military force from" the United States of America; tried by a court martial, and condemned to be shot, on some pretence of crime not yet known to your memorialist; and actually executed in pursuance of his sentence!

As your memorialist understands, his son had not been on shore more than fourteen days when he was thus fatally proceeded against.

By the same public accounts, your memorialist further learns, that Mr. Alexander Arbuthnot, a trader of this place, who is well known never to have had any connection with military life, was also seized at St. Marks, at the same time with your memorialist's son, and executed in pursuance of a sentence of the same court martial.

Your memorialist without being able to conjecture what possible offence either his son or Mr. Arbuthnot could well have been guilty of, within his Catholic majesty's dominions, which could according to any known principle of national law subject their lives to forfeiture in this instance, within the fair jurisdiction of the invading force, respectfully represents, as a characteristic aggravation of this apparently flagitious mockery of justice .."

During his life, Lieutenant Colonel James Armbrister served as Public Notary, a Master and Examiner of the Court of Chancery, an officer of the Militia, Member of the House of Assembly for the Eastern District of New Providence, and Registrar. As such, he was responsible for organizing and conducting the Slave Registrations established by British law.

James Jacob Armbrister died 12 September 1834 in Nassau, Bahamas at the age of 71 years. He was buried at St. Matthew's Anglican Church Cemetery.

To Make this Land Our Own: Community, Identity, and Cultural Adaptation in ... By Arlin C. Migliazzo, page 228. 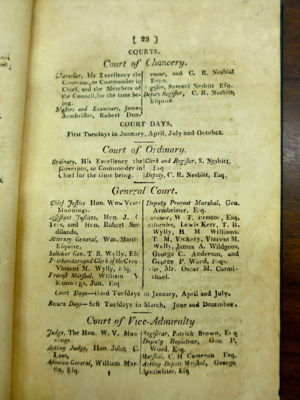 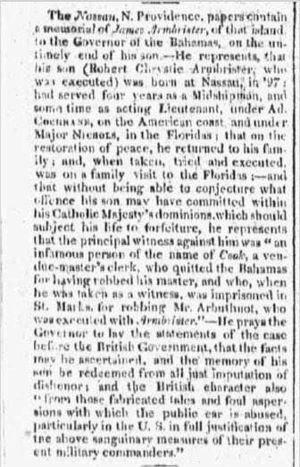 James is 27 degrees from Danielle Liard, 20 degrees from Jack London and 18 degrees from Henry VIII of England on our single family tree. Login to find your connection.