Louis Armstrong is a part of US Black heritage.

Louis Armstrong, nicknamed "Satchmo", "Satch", and "Pops", was an American trumpeter and vocalist. He is among the most influential figures in jazz history.

Louis Daniel Armstrong was born in New Orleans, Louisiana. He was the son of William "Willie" Armstrong and Mary Albert. He claimed to have been born on 4 July 1900, according to most records, which is also the date recorded on his gravestone.[1] However, his baptismal record at the Sacred Heart of Jesus Catholic Church in New Orleans shows that his true date of birth was 4 August 1901.[2]

His father abandoned the family not long after he was born. Louis was left to be raised by his grandmother while his mother turned to prostitution. At the age of six, he attended a school for black children in the racially segregated school system of New Orleans. He was kindly taken in and given odd jobs by a family of Lithuanian Jews, the Karnoffskys, who fed and nurtured the fatherless boy. It was during this time that his interest in music became apparent. Morris Karnoffsky helped Louis to purchase a cornet from a pawn shop, which he learned to play by ear.[3] In 1910, at the age of eight years, he and his mother were living with her common-law husband, Thomas Lee, on Perdido Street, where she made a living as a laundress.[4]

At the age of eleven, Louis dropped out of school, joining a group of boys singing and playing music in the streets. On New Year's Eve of 1912 he fired a blank shot into the air using his stepfather's gun without permission, and was immediately arrested and sentenced the next day to detention at the Colored Waif's Home. He joined the band there, developing his musical skills and rising to the position of bandleader. After about 18 months of militaristic and spartan living, he was released into his father's custody, but after a few months went back to live with his mother on Perdido Street.[3] In 1918, he registered for the draft during World War I, but was never called to serve. He worked as a musician for Peter Lala on Conti Street.[5] He played in New Orleans with a variety of brass bands, and on riverboats up and down the Mississippi, learning to read music and further honing his skills.[3] He was becoming more widely known in the world of jazz.

He married Daisy Parker on 24 March 1919 in New Orleans.[6][7] In 1920, he was boarding on Perdido Street in the household of Geogere Money, with 7 other boarders including his mother. Although the census shows he was married, his wife was not listed there with him. Louis worked as a musician for the theater, and his mother was a private cook.[8]

Louis never had children of his own, but he did help support his cousin Flora's baby boy, Clarence "Hatfield," from the time he was 14 years old. After Flora's death, he assumed full responsibility. After his first marriage, he adopted the child, who had been renamed by his mother before her death as Clarence Armstrong. Louis raised him to adulthood and remained involved in his life.[9]

Louis was invited to join an influential jazz band in Chicago in 1922, making enough money to live in luxury. There is where he met Lillian "Lil" Hardin, the band's pianist, who did much to encourage him. They were married in Chicago on 5 February 1924.[10] He left Chicago to join another top jazz band in New York for about a year, switching to trumpet. He went back in 1925 to join his wife's band for a time, then formed his own band. This gave him the freedom to develop his own unique, personal style, and his group became the most famous jazz band in the United States. He returned to New York in 1929.[3] By 1930 Louis and Lil were enumerated together on the census of New York, living on 140th Street in Harlem, Manhattan Island.[11]

In February 1942, Louis was required to register for the draft during World War II. At that time he resided at the Braddock Hotel on 126th Street at 8th Avenue in New York. He was described as being 5 feet 8 inches tall and 170 pounds, with brown eyes, black hair, dark brown complexion, and a scar on the left side of his forehead.[16]

Louis married Lucille Wilson, a singer at the Cotton Club in New York, in October 1942.[3] By then he was touring extensively, in the U.S. and other countries worldwide. He was well loved by fans of both jazz and pop. Even after a heart attack in 1959, he continued to perform and produce his music. The 1960s saw such pop hits as "Hello, Dolly!" and "What a Wonderful World."[17]

Louis Armstrong died of a heart ailment in Queens, New York City, New York, on 6 July 1971.[18] He was buried in section 9 of Flushing Cemetery in Flushing, Queens.[1]

Notes about his ancestry. A slaveowner named Antoine Turcas purchased Daniel Walker, 32, from Richmond for about $600, a substantial price at the time. [when?] Walker, as further search of the records showed, had a son, also named Daniel, who married Catherine Washington, born in 1837 and brought with her mother and sister from a plantation in Madison County, Miss., to New Orleans, where they were auctioned off together. Catherine and Daniel Walker had a daughter named Josephine who later married Ephraim Armstrong. They had a son named Willie, the father of Louis Armstrong. Catherine Walker, Louis's great-grandmother, attended the baby's baptism in 1901 as a sponsor.[19]

ask our community of genealogists a question.
Sponsored Search by Ancestry.com
DNA
No known carriers of Louis's ancestors' DNA have taken a DNA test. 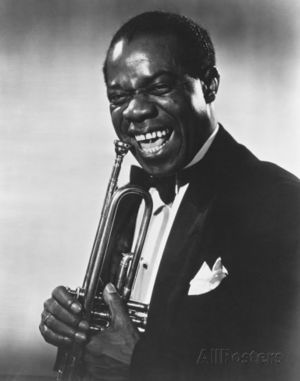 Cheryl (Aldrich) Skordahl
yes, Dallas. The recent profile's creation was unintentional. I did a search and -5227 didn't come up.

I have approved a merge, of course.

Patty (Luker) LaPlante
A grandson of slaves, a boy was born in a poor neighborhood of New Orleans known as the "Back of Town." His father abandoned the family when the child was an infant. His mother became a prostitute and the boy and his sister had to live with their grandmother.

Early in life he proved to be gifted for music and with three other kids he sang in the streets of New Orleans. His first gains were coins that were thrown to them.

A Jewish family, Karnofsky, who had emigrated from Lithuania to the USA, had pity for the 7-year-old boy and brought him into their home. Initially giving 'work' in the house, to feed this hungry child. There he remained and slept in this Jewish family's home where, for one of the first times in his life, he was treated with kindness and tenderness.

When he went to bed, Mrs. Karnovsky sang him a Russian lullaby that he would sing with her. Later, he learned to sing and play several Russian and Jewish songs. Over time, this boy became like an adopted son of this family.

The Karnofskys gave him money to buy his first musical instrument, as was the custom in the Jewish families. They sincerely admired his musical talent. Later, when he became a professional musician and composer, he used Jewish melodies in some of his compositions.

The young black boy grew up and wrote a book about this Jewish family who had adopted him in 1907. In memory of this family, and until the end of his life, he wore a Star of David and said that in this family he had learned "how to live real life and determination."

You might recognize his name. This little boy was called Louis "Satchmo" Armstrong. Louis Armstrong proudly spoke fluent Yiddish and "Satchmo" is Yiddish for "big cheeks, a nickname some say was given to him by Mrs. Karnofsky!