Mr. McCord and Miss Sarah A. Arnold were united in marriage, and for nearly fifty years they have walked the path of life together hand in hand, sharing its joys, and dividing its sorrows. They have two children living: William M., who married Mary C. Ray, and has three children Nettie, Willie, and Alma; Samira. who married Stephen E. Gibson, of Greene Township, and has six children Ida J., Eva May, Clarence L., Thomas A., Zela, and Ralph. Our subject and his wife have been bereft of two of their children James Alfred, and Nancy J. Mrs. McCord was born in Franklin County, Ky., June 13, 1818. Her father, James Arnold, was born in the same county, and was a son of John Arnold, who was a native of either Virginia or Kentucky. His father, James Arnold, Mrs. McCord's great-grandfather, is supposed to have been a native of Virginia, who became one of the earliest settlers of Kentucky, lie purchased a tract of timber land four miles from Frankfort, on the Kentucky River, and established a ferry across that stream, which he managed many years, residing there until his death. Mrs. McCord’s grandfather was reared and married in Kentucky, and remained a resident of that State until 1823. In that year he removed to Putnam County, Ind.. and was one of the early settlers of that section of the country. He improved a farm there, on which he resided until his death about 1837. The maiden name of his wife was Elizabeth Nowell. She was a native of Kentucky, and spent her last years in Putnam County, Ind. The father of Mrs. McCord was a good mechanic, and worked a part of the time at the stone-masons trade, and also at the shoemaker’s trade. In the year 1820 he removed t-I Warren County, Tenn., with his family, and lived there the ensuing five years, when he pulled up his stakes and set out for Putnam County, Ind., the removal in both cases being made with team. He bought a tract of forest-covered land, on which he built a log cabin for a home for his family. They had no stove, and Mrs. McCord’s mother did all her cooking by the fireplace, and she also spun and wove all the cloth used in the family. Mr. Arnold remained a resident of Indiana, until 1830, when he once again became a pioneer of a new State, selling his property there, and removing with a team to Illinois, and locating in what is now Greene Township, Wood ford County. The land was not in the market at the time, but he bought a claim on which he lived for a while, and then removed to Lacon, Marshall County, and engaged in farming there a few years. After that he once more wended his way Westward, this time to Iowa, and settling in Clark County as a pioneer, took up a tract of Government land, which he improved and occupied a few years. He then sold, and returning to this county, resided in Secor, a few years. He then spent his last years with Mrs. McCord, dying in Roanoke. The maiden name of Mrs. McCord’s mother was Jane Goodman, and she was born in Virginia, and died in the home of our subject, in Greene Township. Mrs. McCord’s maternal grandfather was James Goodman, and he was a native of Virginia, and a pioneer of Kentucky, and finally died in Tennessee.

This person was created through the import of Pioneer Stock.GED on 31 October 2010. The following data was included in the gedcom. You may wish to edit it for readability.

Is Sallie your ancestor? Please don't go away!

ask our community of genealogists a question.
Sponsored Search by Ancestry.com
DNA
No known carriers of Sallie's DNA have taken a DNA test. 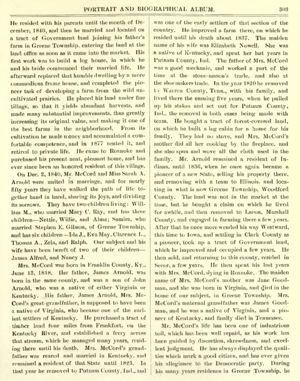