Antonio Arnone was born on February 16, 1879 in Canicattini, Sicily, to Paolo Arnone and Concetta Argiero. Canicattini Bagni is a municipality in the Province of Syracuse, Sicily (Italy), located about 190 kilometres (120 mi) southeast of Palermo and about 20 kilometres (12 mi) southwest of Syracuse. [1] He emigrated to the United States in 1907, sailing from Naples, Italy, on the ship Leon XIII. a Spanish registered ship that carried 117 first, 58 second, and 60 third class passengers. Antionio was probably a third class passenger, also called steerage. He arrived in New York City on April 27 and soon after settled in Boston, Massachusetts.

He married Ignazzinz "Unis" Boetto on August 25, 1907, in Boston. [2] In 1910 they were living in a rented house at Number 2 Lands Court in Boston where Antonio had been working as a blacksmith in the sewing industry. They had two children, son Paulo and daughter Concettina. [3] In about 1917 Antonio registered for the World War I draft. At the time he was living at 161 London in East Boston and working for the Thomas G. Plant Shoe Factory in Jamaica Plain. [4] In the 1930 census, they were living in a rented house at 9 Wright Avenue in Medford, Massachusetts, where Antonio was working as a heel maker in the shoe factory. [5]

In 1941 Antonio applied for citizenship. [6] In the World War II Draft records, Antonio was working for the Copley Square Hotel in the shoe shine department. He was described as 5' 3" tall, weighing 140 pounds, with blue eyes, gray hair, and a dark complexion. He also had a scar over his right eye. [7]

ask our community of genealogists a question.
Sponsored Search by Ancestry.com
DNA
No known carriers of Antonio's DNA have taken a DNA test. 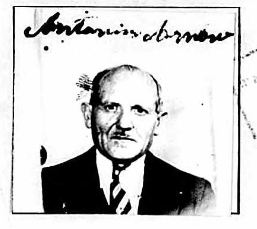