Robert was born in 1881. He was the son of Robert Aroa and Ellen Soper.

He appears in the Nominal Roll of the Seventh Contingent for South Africa. They sailed from Wellington on the Gulf of Taranto on 6 April 1901. [1]

In February 1907 Bertha Christina Jamieson (9 December 1887 - 10 July 1980) and Robert Aroa were married. [2] However it appears that they had already had at least one son, prior to their marriage. This child, Ernest, wasn't registered until they married.

Burial of ashes is at Te Henui Cemetery, New Plymouth [9] 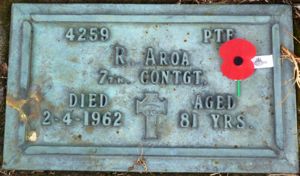 Robert is 24 degrees from Danielle Liard, 18 degrees from Jack London and 20 degrees from Henry VIII of England on our single family tree. Login to find your connection.