In 1909 she married John Henry Ward. He was a cook in Nelson. They had two children,

Both children changed their surnames to Spittal after she married Henry Spittal. Hemay have adopted them, because they are listed as his children on their gavestone.

Grace Aroha (sic) Ward petitioned for a dissolution of her marriage with John Henry Ward, on the grounds of desertion. Mr J P. Hayes appeared for the petitioner, who stated in evidence that she was married to respondent on November 30th, 1909, and they resided together at Hawera and other places, and finally at Nelson. There were two children of the marriage. For a time her husband was second cook at the Masonic Hotel, and she was cook at the Trafalgar Hotel. She had always supported herself and her children. In June, 1914, her husband left Nelson without making any provision for her maintenance. He communicated with her from Hastings, stating that he could not send her money. The day after war broke out he wired stating that he had enlisted. She wrote to him when he was in camp at Auckland, but her last letter was returned endorsed "Not in camp. She had received no money from him since he left her. She had no idea where he was, although she had endeavoured to find his whereabouts.

In the 1928 census, Henry (labourer) and Grace are in Upper Takaka

In the 1949 census Grace is in Collingwood.

ask our community of genealogists a question.
Sponsored Search by Ancestry.com
DNA
No known carriers of Grace's ancestors' DNA have taken a DNA test. 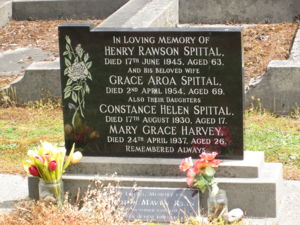 Grace is 25 degrees from Danielle Liard, 18 degrees from Jack London and 19 degrees from Henry VIII of England on our single family tree. Login to find your connection.