Mary Ann Aroa was born in 1834. She was the daughter of Isaac Aroa and Sarah (Atkinson) Aroa .

She emigrated with her parents and siblings to New Zealand in 1855 aged about 21.

In 1857 she married William Broughan / Brougham [1] but the registration has her name as "Anne Eroa" instead of Mary Ann Aroa. Her husband's gravestone spells his name as Broughan.

She is buried with her husband William Broughan at Kaikoura Public Cemetery, Kaikoura, Canterbury, New Zealand [3]

The death occurred on Thursday of another of Kaikoura's pioneers Mrs M. A. Broughan, at the age of 85 years. The late Mrs Broughan arrived in New Zealand 64 years ago at the age of 21, and she had resided in the Kaikoura district for 52 years. Deceased was a kindly-disposed lady who was held in the highest respect by all who came in contact with her.- She had eight children. five of whom are loft to mourn their loss. They are Mr W. Broughan, and Mesdames T. Treloar, L. Akersten (Blenheim), D. Sweeney, and J. Brown (Dannevirke). The late Mrs Broughan's husband predeceased her by 18 months. [4] 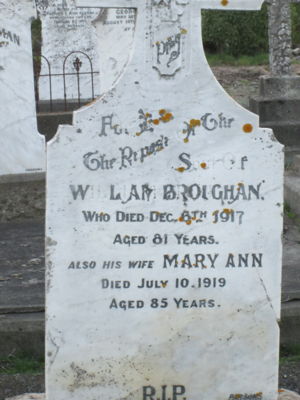 Mary is 22 degrees from Danielle Liard, 18 degrees from Jack London and 21 degrees from Henry VIII of England on our single family tree. Login to find your connection.