Richard moved to Taranaki from Awatere and had a farm in the Kaponga area. Richard farmed 316 acres in the Kaupokonui Block on the Manaia Road near Kaponga, Taranaki. The farm was sold in 1893 [1] and he leased 221 acres near Stratford. In 1902 Aroa Brothers Richard and Isaac announced the set-up of a business in Fitzroy, New Plymouth. [2] In August 1906 the partnership was dissolved, and the Fitroy business was taken over by Isaac Aroa. [3]

From 1906 to December 1909 he had the Brougham Grocery Store in Brougham Street, then in 1910 he moved to a shop in Devon Street, New Plymouth selling farm and dairy produce.

In 1918 he was the secretary for the Manaia Druids Lodge.

Richard and Jane had three daughters

Obituary - January 1921[5]
Mr. Richard Aroa, who was formerly in business at Fitzroy, Okato, and Manaia, and latterly has resided in Onehunga, died rather suddenly yesterday. He leaves a widow (a daughter of Mr. T. Clare, of New Plymouth) and three daughters, the eldest being married. He was born in Blenheim 51 years ago, but spent most of his time in Taranaki, where he was highly respected. He was a prominent member of the Methodist Church and a keen worker in the prohibition cause. General regret will be felt at his sudden demise.

ask our community of genealogists a question.
Sponsored Search by Ancestry.com
DNA Connections
It may be possible to confirm family relationships with Richard by comparing test results with other carriers of his Y-chromosome or his mother's mitochondrial DNA. However, there are no known yDNA or mtDNA test-takers in his direct paternal or maternal line. It is likely that these autosomal DNA test-takers will share DNA with Richard: 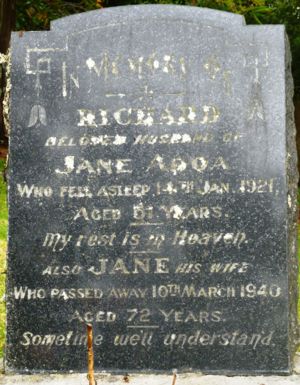 Richard is 24 degrees from Danielle Liard, 18 degrees from Jack London and 20 degrees from Henry VIII of England on our single family tree. Login to find your connection.