NOTICE This profile is often duplicated and parents are assigned without documentation. It is protected by the Acadian Project. Please contact the Acadian Project before attaching parents, children, spouses or changing significant information. You may add to the == Research Section == anytime. Thanks!

Around 1672, Pierre collaborated with Jacques Bourgeois to found the colony "Bourgeois," which became Beaubassin (Amherst, NS).[11][4]

Pierre had two wives.[6] He married Marguerite Dugas, daughter of Abraham Dugas and Marguerite Doucet, around 1675. The couple had two sons:[3]

On Sept 26, 1683, Pierre made a deposition against James Taylor of Boston that he came and stole from him and others from Port Royal[12]

A few years after their marriage, they moved to Beaubassin and their first two children had arrived.[15] Still in Beaubassin, more children, including their only daughter Anne, were born.[16] Unfortunately, by 1700 their only daughter Anne, had died and appears on no further censuses.[17] Soon, the two boys from his first wife were grown and had left home, and the family is complete.[18][19][20]

During the time Pierre and Marie were raising their family, England and France were at war twice: 1687-1697 War of the League of Augsburg (King William’s War); and, 1702-1713 War of the Spanish Succession (Queen Anne’s War).[21][22] During that time, the family would have witnessed the effects of two English raids at Beaubassin by Benjamin Church:

In 1696, Church's raid lasted 9 days. Once the English ships were seen, the inhabitants fled, carrying their more valuable possessions. Church recorded that the settlers’ ”cattle sheep, hogs, and dogs” were left ”lying dead about their houses, chopped and hacked with hatches". The church and some of the houses were also burnt.[21]. The second raid took place in 1702: "The Acadians were in arms and an indecisive skirmish ensued. After the Acadians retreated into the woods, Church and his men found that the inhabitants had removed as much of their household and farm goods as possible. Church set the buildings on fire... and killed about 100 cattle before leaving to return to Boston." [21]

They must have worked hard to recover their losses because by 1707 they had animals on their land again.[20]

Birth and yDNA: Savard has his birth at about 1646[2] presumably because it is consistent with the 1671 Census where he is 40 years of age. Stephen White uses 1650[3] presumably because it is consistent with the later census of 1693, 1698, and 1700. We have put the date as 1646 to conform with Savard and to avoid confusion when searching the FTDNA site, which lists y-DNA results of Pierre Arsenault b. 1646 here.

Parents: Pierre's parents are unknown. Some believe Abraham and Marguerite Doucet are his parents, but evidence supporting this has not been found.

2nd Marriage. Minor discrepancy. Stephen White's DGFA p 23 lists marriage 'before 1686' (presumably because they are together in the 1686 census), but, his 37 familles paper lists it as 'around 1685'.

Sponsored Search by Ancestry.com
DNA Connections
It may be possible to confirm family relationships with Pierre by comparing test results with other carriers of his Y-chromosome or his mother's mitochondrial DNA. Y-chromosome DNA test-takers in his direct paternal line on WikiTree: It is likely that these autosomal DNA test-takers will share some percentage (beta) of DNA with Pierre: 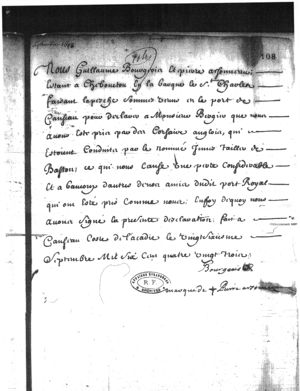 Gisèle Cormier
Arsenault-1805 and Arseneau-10 appear to represent the same person because: The birth date is different. However, same spouse and same son Abraham born around 1702 and married to Marie-Josèphe. Please take a look at this well sourced family tree. https://gw.geneanet.org/katheriot?lang=en&pz=frederick+joseph&nz=theriot&ocz=1&p=pierre&n=arseneau Abraham is also a duplicate and needs to be merged.
posted Jan 22, 2021 by Gisèle Cormier

Francis MacKinnon
Arsenault-1805 and Arseneau-10 do not represent the same person because: One of the births is right and the other is wrong
posted Jan 13, 2021 by Francis MacKinnon

Gisèle Cormier
Arsenault-1805 and Arseneau-10 appear to represent the same person because: Correct date of birth is around 1650 (DGFA p. 23). Was married to Marie Guérin (2nd marriage). This couple had a son Abraham married to Marie-Josèphe Savoie.
posted Jan 13, 2021 by Gisèle Cormier

Brad Foley
Arsenaualt-1 and Arseneau-10 appear to represent the same person because: This is part of a complex duplicated family merge. See the write up on Arsenaualt-1 for details
posted May 18, 2020 by Brad Foley

Brad Foley
Arsenaualt-1 and Arsenault-222 do not represent the same person because: need to change the details of a complex merge
posted on Arsenault-222 (merged) May 18, 2020 by Brad Foley

Brad Foley
Arsenault-222 and Arseneau-10 appear to represent the same person because: See the write up on Arsenault-222 for why these profiles belong together. I've tried to make the duplicated family merge-ready.
posted May 18, 2020 by Brad Foley

Brad Foley
Arsenaualt-1 and Arsenault-222 appear to represent the same person because: These profiles seem to be the same person, one with a typo in his name, in a series of duplicated and probably fictitious, profiles for people in a family living ca 1650 in, probably, France.
posted on Arsenault-222 (merged) May 16, 2020 by Brad Foley
[Living Gauvin]
anyone know why he's listed w/ his mother-in-law as his mother?
posted Jul 25, 2016 by [Living Gauvin]

Vincent Courtney
Arseneau-121 and Arseneau-10 are not ready to be merged because: Looks promising, but with the lack of data in Aresenau-121, I am opting to be cautious. I need to see more matching data.
posted Nov 03, 2014 by Vincent Courtney