NOTICE: this profile is protected by the Acadian Project because of frequent duplication, variant name spelling, confusion with a similar person. Please contact the Acadian Project before making any substantive changes. Thanks for helping make WikiTree the best site for accurate information.

Pierre Arseneau, carrying his father's name, was born about 1676 in the Port Royal district of Acadie.[1][2][3] He is the first-born of the two children that Pierre Arseneau had with his first wife, Marguerite Dugas. The father remarried around 1685, when Pierre and his younger brother Abraham were still children. The family moved to Beaubassin. [4] Their stepmother was Marie Guérin, who gave birth to 7 offspring with Pierre the father.[5]

Pierre, this son, married Anne Marie Boudrot in about 1697. (Their first child was 2 in 1700, thus born in 1698, so Anne would have likely become pregnant in 1697, probably soon after marriage). They almost surely wed in Beaubassin, which is where Pierre had lived with his parents since at least 1693 and where he had established his own household by 1698.[6]

Their first child was born later in 1698 as he was already 2 in their census reading of 1700.[7]. Another boy followed quickly, with Anne apparently arriving after 1702 as no daughters were included in that census.[8]. They lived next door to his parents and his older brother as noted in their order of listing in 1707.[9] The final census for that area records 7 children.[10] The couple would eventually have 10 children:[1][11]

In 1728, Pierre and Anne moved with the youngest 6 of their 10 children[1] to what is today the Canadian province of Prince Edward Island, then called Île Saint-Jean. With them came Charles Arseneau, their second-oldest son, with his own wife and children. In 1730 (before the census that year) another son settled with wife and offspring alongside his parents and brother. This was the eldest of Pierre and Anne’s progeny, and the third Acadian bearing the name of Pierre Arseneau.

Altogether, this accounts for 8 of the 10 children. The two others did not settle on the Island. Oldest daughter Anne had married in Beaubassin in 1720 and died there before the move. Third-oldest son Jean had married there as well, around 1725, and stayed behind.[13]

Their migration has a historical context. Some 15 years earlier in 1713, Acadie (Nova Scotia in its older, larger sense) had been ceded once and for all to Britain. But Île St-Jean and today’s Cape Breton remained with France. In 1720, the mother country attempted its first official colonization of Île St-Jean, bringing settlers from France, under auspices of the Comte de Saint-Pierre. Only a tiny smattering of Acadians joined that effort over the next few years. That colonial gesture persisted for only 4 years, collapsing financially in 1724, and most of the stranded immigrants moved back to France or to the decade-old but growing town of Louisbourg in Cape Breton. Acadians remained nervous about moving to the Island, however, for fear that the Comte still had a claim to the place, which might have put them under the thumb of an overlord.[14]

Still, a number of the Comte’s recruits did remain on Île Saint-Jean, farming or fishing or both. Also, an occasional new French emigré arrived to put down roots there. (Some of the latter had been among the large numbers of seasonal cod-fishers who arrived from France annually. Others of them - judging by the early census data from 1728 to 1735 - were undoubtedly small entrepreneurs who hired such seasonal workers.[15]) By 1728, the Acadians’ fears must have subsided a bit as well, because an unprecedented number of families crossed from the mainland in that year, including this Arseneau household and a few close kin and former neighbours, which helped bring the total non-aboriginal population of the island to about 300 in that year.

Pioneering their own small Acadian hamlet, the Arseneau newcomers established their farms further west than all those predecessors and contemporaries, at a spot known as Malpec (or Malpèque), on the western shore of the bay of the same name.

Both the census and the other population survey in 1728 listed a third household head at Malpec. He was farmer Jean Lambert, with a wife and 2 young boys, who had come from Acadie in that same year. The census noted that they had no house. No other information has emerged about these folks, and Jean Lambert was no longer on Île Saint-Jean by 1730.

The 1730 census showed 8 children in the home of Pierre and Anne (with no indication of ages). Charles and his wife had 3. As already mentioned, Anne and Pierre’s eldest son, Pierre (the Third) was also present at Malpec by then. He and his wife also had 3 children in the house. Farming was still the livelihood of all three families at Malpec. No watercraft were recorded at the settlement in this survey.[19]

Another census took place in 1734.[20] An additional and more detailed population survey was completed in the same year. [21] Again, no boats were counted at Malpec. But this time, both counts included livestock. Malpec now had 4 households.

(4) The new man was Louis DesRoches. He and his teenaged brother Julien had arrived around 1731 from the little town of Carolles on the west coast of Normandy (probably as seasonal cod-fishers). Louis settled at Malpec as a farmer, marrying Marguerite Arseneau, daughter of Anne and Pierre. In 1734, Louis was correctly listed as 27 (he would turn 28 in October), his wife was 22, and their daughter was 2. They were tending 4 oxen, 3 cows, 2 ewes and 2 lambs.[22][23]

The same 4 farming households appeared in the 1735 census, but a fifth was added.

(3) With Pierre the son were listed a wife, 3 boys in the older category, 2 girls, 6 large livestock, 3 smaller animals, and only 8 bushels.

(4) Louis DesRoches and wife had a boy of +15 in their home (undoubtedly Louis’ brother Julien, who was 21 by then but would not marry until much later), and still only 1 daughter. Their farm possessed 4 bigger animals and 4 smaller ones, with a grain output of 6 bushels.

(5) The new arrival was an Acadian “builder” named François with an uncertain surname, which the transcript rendered as “Greniau?” (query included; no such surname). He was married, with 2 boys in the +15 column and a girl. Not farmers, they had still grown some 3 bushels of grain.

We cannot date the death of Pierre Arseneau, spouse of Anne Boudrot. His last recorded appearance was at Malpec in that 1735 census of Île-Saint-Jean, when he would have been about 58 years old by the favoured estimates.[1][24][25] 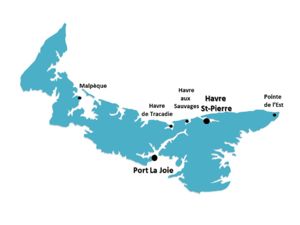 Jacqueline Girouard
Hi Shae, thanks for the note. It looks like he is connectted to Boudrot-130 and she is the daugher of Jean Boudrot. It's in the biography as well.
posted Jul 29, 2018 by Jacqueline Girouard

John DeRoche
I think the problem arises from a confusion over which Pierre Arseneau we are dealing with here. Marie Arseneau-31 is the granddaughter of Arseneau-15. Her father is Pierre the third, Arseneau-103, who is the son of Pierre second, #15.
posted Jun 15, 2016 by John DeRoche