Mr. Charles Ashbaker was born February 14, 1876 at Bern, Switzerland to Jacob and Elizabeth Brukhalter Ashbaker. He and Esther Peterson were married on July 3, 1901 in the Logan LDS Temple. She died Feb. 17, 1965. Mr. Ashbaker, age 94, died at the home of his daughter, Aileen Hubbard, in Soda Springs, Idaho. He had homesteaded at Grace and had farmed there until his retirement in 1939. He had served as a trustee of the Telluride School District and as a director of the Last Chance Canal Co.. Survivors are two sons and eight daughters: Willard and Harley Ashbaker, Ada Harker, Anna Paskins, Mabel Allsop, Roma Roghaar, Lula Lich, Lillian Stoddard, Aileen Hubbard and Lucille Tibbetts. Also surviving are 35 grandchildren, 66 great-grandchildren and 1 great-great-grandchild. 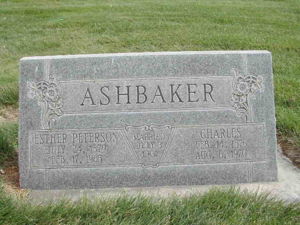