Significant events which shaped the period during which Yoshikatsu was shogun:[3]

July 12, 1441 (Kakitsu 1, 24th day of the 6th month): Shogun Yoshinori is murdered at the age of 48 by Akamatsu Mitsusuke; and shortly thereafter, it is determined that his 8-year-old son, Yoshikatsu, will become the new Shogun.[4]

1442 (Kakitsu 2): Yoshikatsu is confirmed as shogun. August 16, 1443 (Kakitsu 3, 21 day of the 7th month): Shogun Yoshikatsu died at the age of 10. Fond of horse riding, he was fatally injured in a fall from a horse. He had been shogun for only three years. His 8-year-old brother, Yoshinari, was then named shogun. Several years after he became shogun, Yoshinari changed his name to Yoshimasa, and he is better known by that name.

Is Yoshikatsu your ancestor? Please don't go away!

ask our community of genealogists a question.
Sponsored Search by Ancestry.com
DNA
No known carriers of Yoshikatsu's ancestors' DNA have taken a DNA test. 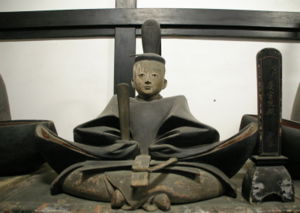