Certainly it would not be reasonable to expect that one of these advanced years would wish to endure the hardships and exposures incidental to developing an absolute wilderness, such as the Monmouth Tract, in New Jersey, was, and which, in 1665, was thrown open to settlers. In this year, it is stated that James Ashton claimed two hundred and forty acres, from the Proprietors, in right of himself and wife, which was the amount of land given, under the Grants and Concessions, to actual settlers. As further proof that James Ashton could not have been the early settler of Rhode Island, as well as of the Monmouth Tract, there is evidence that he held minor positions, such as overseer in 1677; constable 1669 and 1679; that his wife, Deliverance Throckmorton, was among the children of John Throckmorton, who were born not far from 1640, which would have made her the junior of her husband by nearly thirty-five or forty years; and lastly, that this James Ashton made a gift of lands to his son, James, in 1698, which would have made him ninety-five years of age, and that the death of James Ashton occurred in 1705, when administration was granted to his wife, upon his estate, which would have made him one hundred and two years of age, if he were the Rhode Island settler of 1639. From such evidence it can be absolutely established that there were two James Ashtons in Rhode Island, doubtless father and son.”[1]

John Stillwell suggests it is a father-son relationship: names him as James Ashton, Jr., states that he is "doubtless" the son of James Ashton who was commissioner for several years and a deputy in Rhode Island. [2]

Austin’s Genealogical Dictionary of Rhode Island said perhaps James of New Jersey was a child of James of Providence.[3] In 1945, G. Andrews Moriarty added him as son in “Additions and Corrections” to Austin.[4] More recently Dean Crawford Smith in the Ancestry of Emily Jane Angell says there may be a relationship between the two men “but what it is has not been determined.”[5]

His death occurred about 1705, for administration of his estate was granted to his wife, Deliverance, May 19, of that year.[1][6] The exact place of death is unknown but the administrator's bond was drawn in Middletown, New Jersey.

On 19 May 1705. James Ashton of Middletown, Monmouth Co. Executors Bond: Deliverance and James Ashton as administrators of the estate; Richard Saltar and Anthony Woodward fellow bondsmen.[19]

Marriage and Children He married Deliverance, daughter of John Throckmorton,[1] 25 May 1669,[20] probably in Monmouth County.

Their children, so far as known, were: 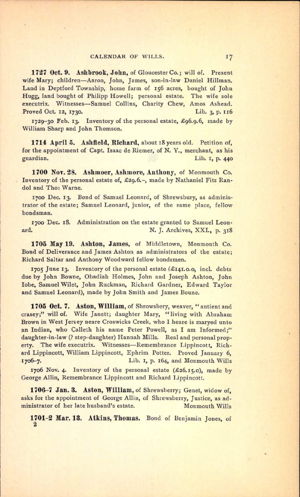 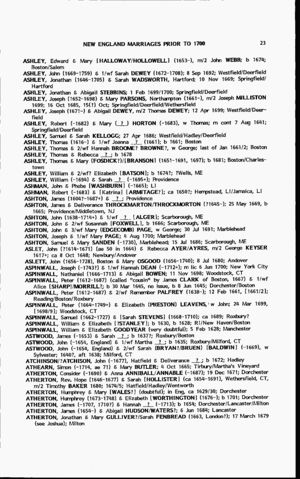 Anne B
I've written a bio for this profile. The death date should be before 19 May 1705. The birth is an estimate, (probably should be closer to 1645 and is definitely the wrong place. He may have the wrong parent attached. (certainly the data on that parent is incorrect). Those parents should be marked uncertain. Or maybe not even attached. (I'm in favor of uncertain in this case.) I am working the line. I've left the old bios, for the moment, but intend to remove them and change the data. Are there any objections.
posted May 15, 2017 by Anne B

Steven Mix
This James Ashton-74 is obviously attached to the grandparents in error. He should be removed from that couple as parents, and then merged with the match, Ashton-107, which has a correct generation James Ashton-699 attached as father.

Then that James Ashton-699 should be attached as the probable Son of James Ashton-52 Sr. and Alice (Honeychurch) Ashton

Sandi Wiggins
Any objection to disconnecting incorrect father so a merge can be made with Ashton-74?
posted Feb 21, 2016 by Sandi Wiggins
Linda Crannell
Ashton-935 and Ashton-107 appear to represent the same person because: I believe that these are the same person. I have been found John Ashton's line in Historical and genealogical Miscellany, Early Settlers of New Jersey and their Descendants by JOHN E. Stillwell M. D., VOL. Ill, NEW YORK,1914 Page 22 - 25. He is commonly duplicated.
posted Feb 22, 2015 by Linda Crannell
Robert Adams
Ashton-107 and Ashton-74 are not ready to be merged because: The fathers do not appear to match and should be resolved before proceeding with this merge.
posted Dec 01, 2014 by Robert Adams

Greg Hays
Ashton-560 and Ashton-74 appear to represent the same person because: father and approximate date of birth match; I have seen birth of 1642 in NJ but that may be confused with his son as there are immigration for records of James arriving in NJ in 1669
posted Dec 01, 2014 by Greg Hays