Anne Askew was born in about 1521, probably at Stallingborough, Lincolnshire.[1] Her parents were William Askew and his first wife Elizabeth Wrottesley.[1][2][3]

According to John Bale, who published Anne's main writings, Anne's father arranged for her to marry someone called Thomas Kyme. He may be one of two people, both of Friskney, Lancashire, and it is said that he was previously engaged to marry Anne's older sister Martha, but she died before the marriage could take place, so Anne was offered to Thomas instead, "so that," according to Bale, "in the ende she was compelled agaynst her wyll or fre consent to marrye with hym."[1][3] They had two children.[1] Anne never used her married name when she wrote her signature.[3]

Anne became a staunch protestant, and this brought her into conflict with the Lincolnshire ecclesiastical authorities. She was warned by friends that "if I ded come to Lyncolne, the prestes wolde assault me and put me to great trouble, as therof they had made their boast", but still went to the city.[1]

John Bale, who was sympathetic to her, stated that her husband "vyolentlye drove her oute of hyse howse" because of her beliefs.[1] The Jesuit Robert Persons (1646-1610) gave a different account, saying that she left her husband "to gad up and downe the countrey a ghospelling and ghossipinge where she might and ought not."[1] Whatever is the truth, Anne was probably in London by the end of 1544. She may have become close to Katherine Brandon, the protestant-leaning Duchess of Suffolk, for whom a brother-in-law did some legal work, and this was suspected in some of her subsequent interrogations.[1]

Her first examination for heresy followed shortly after her arrival in London: she was detained in March 1545. She put her name to a confession of Catholic faith as part of the negotiations leading to her being released on bail.[1] A further examination followed in June 1545 but she was freed because the witness for a charge of making unorthodox statements was found to be unreliable.[1]

In May 1546 her husband Thomas Kyme was ordered to appear before the Privy Council, with his wife, within a fortnight. Despite two days of interrogation by leading members of the church and of royal government, and threats of execution, Anne refused to renounce her protestant views, and she was held, "extremyte of syckenesse", first in Newgate Prison, and then in the Tower of London. There were attempts to make her incriminate others, including members of the nobility like the Duchess of Suffolk, and when these failed, she was tortured on the rack, even though this was against the law for a woman of her status. Hardly any information was obtained from her: she continued "in stedfast mynde, and yet she hath ben rakked sins [since] her condempnacion."[1]

Anne was then transferred to a house to recover. She refused another chance to renounce her protestant views.[1] She was condemned to death on 2 July 1546,[4] and was burnt at the stake at Smithfield, London, along with some other Protestants, on 16 July 1546. An eyewitness recorded that she was so physically damaged by her torture that she could not stand. Among those who watched her burning were leading figures of the realm, an indication of the importance the royal government placed upon her execution.[1]

Anne wrote an account of her interrogations and imprisonments for heresy, with associated documents. This contains next to no information about her family. It was published after her death by John Bale.[1][3][5] While in Newgate, she wrote a ballad which was included by John Bale in the book.[6]

In the past Anne has been shown on WikiTree as mother of William Askew, grandfather of Margaret Askew, usually known by her name Margaret Fell (from her first marriage), who married the Quaker George Fox as her second husband. This is incorrect. Apart from the fact that Anne Askew lived in a completely different part of England (she was from a Lincolnshire family not a Lancashire one[1]), a law case summarised on the profile of William Askew gives conclusive evidence that the claim is false.

In addition, Anne Askew married Thomas Kyme, and, had William been a son of Anne, his last name would have been Kyme not Askew.

The belief may have stemmed from an 1865 book by Maria Webb, The Fells of Swarthmoor Hall.[7] 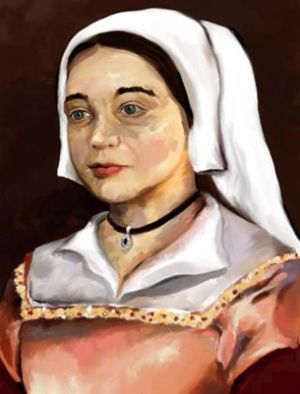 Woodcut of the burning of Anne Askew

Leave a message for others who see this profile.
There are no comments yet.
Login to post a comment.
Isaac Taylor
Hello profile manager(s),

Did she have no children?

Per this source, she had two Children with Kyme:

Jo Fitz-Henry
The biography already states that she had two children with Thomas Kyme. Neither Gairdner's entry in the DNB, nor Bale give any further details. If you have sources for these two children so they can be added, then that would be marvellous.
posted Nov 26, 2020 by Jo Fitz-Henry

Michael Cayley
The absence of profiles for children does not mean there were none. They are frequently mentioned in bios without profiles being created. In this case, in addition, we do not know the names of the children, though the existence of 2 children is properly mentioned in the bio, as Jo has said.

Research notes bring out that there has been a misattributed child shown on WikiTree in the past. This family has been the subject of much false information in trees on the internet and elsewhere. Extreme caution is needed before adding named children, but, Isaac, if you have good well-sourced information to identify the children, please share it.

Michael Cayley
I plan shortly to do some work on this profile on behalf of the England Project, mainly to fill out the bio. Please get in touch if there are any questions.
posted Aug 22, 2020 by Michael Cayley

Michael Cayley
I have now finished the main work I currently intend on this profile: if anyone spots any typos etc, please either correct them or message me. Thanks!
posted Aug 27, 2020 by Michael Cayley

Jo Fitz-Henry
Dear David and Marie, the England Project would like to comanage this profile of Anne Askew with you, and add Project Protection as her family line is often confused with other Askew families.

Categories: Protestant Martyrs of the English Reformation | Prisoners of the Tower of London | People Executed by the Tudors | This Day In History July 16 | English Authors | English Poets