Mary, the daughter of John Aspinwall Jr and Susan Howland was born on 20 December 1809 in New York City.[2]

The 1850 U.S. Census indicates that Mary (40 years) and Isaac (60 years) were residing with sons James (22 years) and John (10 years) in Hyde Park, Duchess, NY. Isaac's occupation is listed as 'Farmer,' and son James as 'Lawyer.' in addition, they have listed a coachman, groom, gardener and 3 servants.[6]
The 1860 U.S. Census shows that the household for Mary (50 years) and Isaac (70 years) includes their son John (20 years), as well as a gardener, coachman and five domestics residing in Hyde Park, New York. In this census, Isaac is listed as a Physician.[7]

In 1832, Mary, Isaac and their family were living at "Rosedale,' built in that year by Isaac. Rosedale was close to his father's home where Mary enjoyed country life with her husband and sons. Mary is the maternal grandmother of U.S. President Franklin Delano Roosevelt (FDR). Her ancestry makes FDR a Mayflower descendant of John and Elizabeth (Tilley) Howland.

Their home, the center of the Rosedale estate, still stands on Riverview Circle in Hyde Park. It was listed on the National Register of Historic Places in 1993, along with a cottage and boathouse on the nearby Hudson River.[8]

Mary Rebecca (Aspinwall) Roosevelt died on 24 February 1886 at 77 years of age in Manhattan, New York.[9][10]Mary was reportedly buried in Green-Wood Cemetery two days after her death; however, her remains may have been moved to Saint James Episcopal Churchyard in Hyde Park, New York, as that is the location of her tombstone.[11] 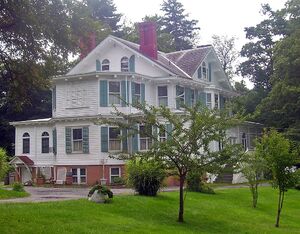 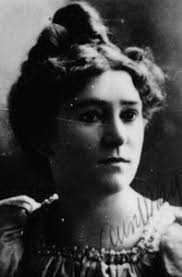 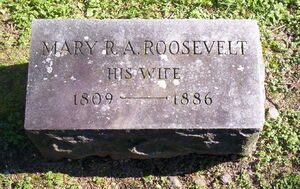 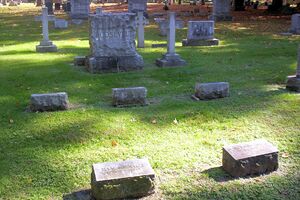