As far as I can tell, Mordukh adopted this surname. Everyone in the Lithuanian records who bears this surname, or a related one, is descended from Mordukh. Given that Mordukh was born in 1803, it is plausible that he adopted a surname on his own, rather than taking his father's. Update: I think his father is recorded under surname Asiran.

(I do not find a German word "anstrom", I do find a German verb "anströmen", which has meanings like what Beider proposes. Perhaps "anström" is some conjugation of that verb?)

The "S" in "SA:" in the last two records indicates that Anspron and Aspron are secondary surnames to primary surname Anshtrum. Perhaps that is true, but note that in the available records, the order is reversed:

(Those are the only two records in which precisely the transliteration Aspron or Anspron is seen.). Only later do we see records of Anshtrum and Anshtrun.

Apart from the four transliterations Beider mentions. I see

Variation in the surname: Notice that in his direct record the surname is Aspron, whereas in later records of his descendents that mention him the surname is Anspron, or something else. (I would not have found the Aspron record except that Beider's book mentions that Aspron is a variant of Anspron.)

1858 Revision List, Vilnius, Family number 2432, surname ASPRON. Previous registration number is 1821 (which is how I was able to find the 1851 record above). Note the surname has changed substantially. Head of household is again Mordukh son of Movsha.

Is Mordukh your ancestor? Please don't go away!

ask our community of genealogists a question.
Sponsored Search by Ancestry.com
DNA Connections
It may be possible to confirm family relationships with Mordukh by comparing test results with other carriers of his Y-chromosome or his mother's mitochondrial DNA. However, there are no known yDNA or mtDNA test-takers in his direct paternal or maternal line. It is likely that these autosomal DNA test-takers will share some percentage of DNA with Mordukh: 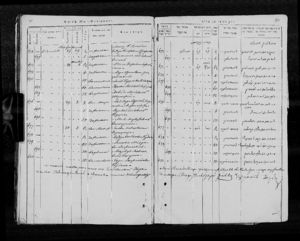