Chet Atkins, aka The Country Gentleman, was one of the most highly regarded and skilled American guitarists of the twentieth century.[1][2] He is also known for his work in developing "Nashville Sound", a smooth style of country music, with Owen Bradley.[2][3][4]

Chester Burton Atkins was born on June 20, 1924, in Luttrell, Tennessee, near Clinch Mountain on his grandfather's farm, and grew up with his mother Ida Ella Sharp, after she and his father, James Atkins, divorced when he was six.[5][4][6][7][8] He had two brothers and a sister—he was the youngest.[2]

Chet started out his musical pursuits on the ukulele, later moving on to the fiddle.[2] He traded his brother Lowell an old pistol (or possibly a farm wagon) and some chores for a guitar that had belonged to his step-father, Willie, when he was nine.[4] He started playing local parties and businesses.[4] Chet stated in his 1974 autobiography, "We were so poor and everybody around us was so poor that it was the forties before anyone even knew there had been a depression."[4]

Chet relocated to Fortson, Georgia, to live with his father because of a near-fatal asthma condition in the late thirties.[2][9] He often stayed home from school because of his health, and taught himself banjo during those times.[4] Because of his illness, he was forced to sleep in a straight-back chair in order to breathe comfortably.[2] On those nights, he would play his guitar until he fell asleep, and continue holding it, a habit which lasted his whole life.[2]

Chet became an accomplished guitarist while he was in high school, but it wasn't surprising considering his family's musical background.[2] Chet's grandfather was a champion fiddler.[4] Chet's father, James, was a music teacher, piano tuner, and singer.[4] His half brother, Jim, was a rhythm guitarist in the Les Paul Trio in the thirties.[4] His older brother, Lowell, also played guitar.[4] He quit high school and jumped in on the spread of country music out of the South, as World War II drafted soldiers across the country.[4] At age 17, he was a professional musician.[4]

Chet made his living first playing fiddle with the Jumpin' Bill Carlisle-Archie Campbell radio show.[4] A producer there heard him playing guitar in down times, and drafted him to play rhythm guitar for the "Midday Merry-Go-Round" show.[4] Despite his talent, he'd have trouble keeping jobs because of his shyness, which was often mistaken for hostility or arrogance.[4] His luck turned when he joined up with Mother Maybelle and the Carter Sisters.[4] Their fame grew into a TV show, and more so once they started appearing on the Grand Ole Opry.[4]

Chet profited off the popularity of his TV time by starting to record albums.[4] His first hit LP was "The Galloping Guitars" in 1949.[4] He moved to Nashville and started work as a studio musician.[4] By 1957, Chet was the head of recording operations at RCA Victor in Nashville.[4] It was in this role that he convinced RCA to outbid Columbia Records and sign Elvis Presley- a decision that made the company millions.[4]

Jazz had always been a strong love of his, and often in his career he was criticized by "pure" country musicians for his jazz influences.[2] He also said on many occasions that he did not like being called a "country guitarist", insisting that he was a guitarist, period.[2] Although he played 'by ear' and was a masterful improviser he was able to read music and even performed some classical guitar pieces.[2] Chet's picking style was inspired by Merle Travis, Django Reinhardt, George Barnes and Les Paul.[2] He was admired for it across music styles and geographical borders.[2] Part of Chet's talent included being able to play chords and push out a melody line at the same time, using his trademark thumb and three-finger playing style, a technique he developed trying to mimic Merle Travis' thumb and one-finger style.[3][4]

Chet produced records for Perry Como, Elvis Presley, the Everly Brothers, Eddy Arnold, Don Gibson, Jim Reeves, Jerry Reed, Skeeter Davis, Connie Smith, Waylon Jennings, and many other well known artists.[2] His work in developing "Nashville Sound" is attributed to saving country music from a persistent slump it had been suffering by working to separate it from rockabilly and attract pop music fans.[3][4] The development turned Nashville into Music City, U.S.A.[4] He was known for how down-to-earth he could be, especially with those whose music careers he helped shape.[4]

Chet eventually worked himself back out of the production side of music and back into playing, beginning worldwide tours in 1967.[4] He wanted to have fun again.[4]

Chet Atkins died June 30, 2001, at his home in Nashville, Tennessee.[4][7] Chet had spent many years battling cancers, including colon cancer in the 70's and a brain tumor in 1997.[4] When he passed he was survived by his wife of 55 years, Leona, his daughter Merle (named after one of his heroes, Merle Travis, and Leona's mother, Merle Hancock Johnson), and two granddaughters.[4] Chet was buried in Harpeth Hills Memory Gardens, Nashville, Davidson, Tennessee.[10]

Among many honors, Chet received 14 Grammy Awards, including the Grammy Lifetime Achievement Award, and 9 Country Music Association Instrumentalist of the Year awards.[2] He was inducted into both the Country Music Hall of Fame and Museum and the Rock and Roll Hall of Fame.[2] Chet was offered numerous honorary degrees from universities, but turned them all down for his own designation as a C.G.P., "Certified Guitar Picker."[4]

Sponsored Search by Ancestry.com
DNA Connections
It may be possible to confirm family relationships with Chet by comparing test results with other carriers of his Y-chromosome or his mother's mitochondrial DNA. Y-chromosome DNA test-takers in his direct paternal line on WikiTree: 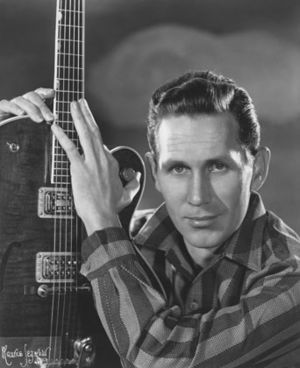 Lea Isaacs
Chet Atkins is my 5th cousin twice removed. I knew we were related through my Dad's side of the family. Still very cool to see these connections come to life on Wikitree! :-)
posted Aug 04, 2020 by Lea Isaacs
Wendy Johnson
13th cousins, once removed....I love this website!
posted Jun 22, 2018 by Wendy Johnson

Chet is 20 degrees from Cecil B. DeMille, 23 degrees from Rosalie Neve and 17 degrees from Henry VIII of England on our single family tree. Login to find your connection.