René Auberjonois is an actor best known for his role as Odo on Star Trek Deep Space Nine.

René was born in New York City on 1 June 1940 to his parents Fernand Gustave Auberjonois and Laure Louise Napoléone Eugénie Caroline Murat. He was their first born child, although his mother had two previous children in the household from a prior marriage. His father was a war correspondent and enlisted in the U.S. Army, even going on secret assignments that took him far from home. René had one younger brother (Michel, born in 1941) who was the couple's last born child, He grew up in New York City at first, but after the war had ended, the family moved to Paris where he at an early age made the decision to become an actor.

The family did move back to the United States and lived in New York. René joined an actors group while there and began to learn his craft. The family moved again to London, England, where he finished High School and studied Theatre. He returned to the United States to attend Carnegie Mellon University where he graduated from in 1962.

Shortly after graduating, in 1963 he was married to Judith Mihalyi. His career took him to the theater first, working in Washington DC, San Francisco, and even on Broadway. He received a Tony nomination for his work, then later won a Tony Award in 1969 for his role in the play Coco.

By 1966, he had tested the waters with his first television appearance. And by 1970, he appeared in his first film role as Father Mulcahy on M*A*S*H. He soon began to alternate between film, television and the stage very frequently, with an occasional breakout role that would put a mark on his career.

In the 1970's, he built his career, appearing on single episodes of many television shows, having appearances in 10 separate movies, and appearing a several stage plays. His family also grew by two, as he and Judith had two children: Tessa and Remy. In the 1980's his career expanded to voice talent, and he primarily did animated episodes, animated movies, a few roles in regular movies, and appeared in 135 episodes of television's Benson as Clayton Endicott III.

In the 1990's, he continued to work in all mediums - theater, television, movies, and voice acting. But his big role was as Odo in Star Trek: Deep Space Nine. He appeared in 173 episodes of that show from 1993 to 1999, and would go on later in his career to do voice-overs for games until his passing many years later.

In the 2000's, he showed no signs of slowing down, continuing to appear on the stage, television, and in movies, but this time it was his role as law office partner Paul Lewiston in Boston Legal, where he appeared for 71 episodes. He also continued his voice acting and was on many different animated shows.

In the 2010's, he slowed down just a bit, spending less time on television and film, and doing mostly voice acting parts. It does not appear he acted on the stage at all during this period. It must have been in 2018-2019 that he was informed of his metastatic lung cancer, which according to doctors is always fatal. He seems to have spent a flurry of activity near the end, appearing in 4 different movies and taping his voice as Odo for the Star Trek Online game prior to his passing. He died on 8 December 2019 in Los Angeles at the age of 79.

Is René your relative? Please don't go away!

ask our community of genealogists a question.
Sponsored Search by Ancestry.com
DNA
No known carriers of René's ancestors' DNA have taken a DNA test. 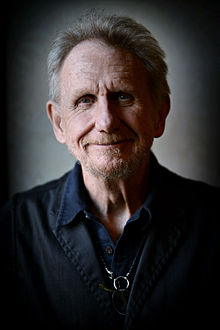 Lori Jo (Everts) DeWitt
For those that may not know what the term "metastatic" cancer means. The cancer metastatizes or spreads throughout the body.

Having said that...he will be greatly missed! We really enjoyed watching him on DS 9. Just so sad!

René is 26 degrees from Wendy Taylor, 11 degrees from Christian VII af Danmark and 17 degrees from Henry VIII of England on our single family tree. Login to find your connection.