[children unknown]
Died about 14 Nov 0565 at about age 83 in Constantinople, Eastern Roman Empire

Latin: Flavius Petrus Sabbatius Justinianus Augustus Born Petrus Sabbatius into a peasant family believed to have been of Illyro-Roman or Thraco-Roman origins, he later adopted the name Justinian to indicate he was adopted by his uncle Justin.[1]

He was also traditionally known as Justinian the Great and also as Saint Justinian the Emperor in the Eastern Orthodox Church.[2]

His mother was was Vigilantia, the sister of Justin of the imperial guard who became emperor from 518-527. [3]

Justinian's uncle Justin was proclaimed emperor when Emperor Anastasius died in 518. Justinian was Justin's close confidant and assistant. Justinian became consul in 521 and later commander of the army of the east. Justin made Justinian associate emperor on 1 April 527 and Justinian became the de facto ruler near the end of Justin's reign. When Justin died on 1 August 527, Justinian became sole emperor.[3]

Justinian is perhaps best known for his judicial reforms achieved through a complete revision of all Roman civil law, known today as Corpus juris civilis.[4] It forms the basis of Cannon law, and its influence can still be seen in many aspects of modern civil law.

Justinian also had a great interest in theology and the theological conflicts of his day. Although the Council of Chalcedon in 451 had condemned as heresy the Monophysite doctrines that Jesus Christ had one divine nature or a synthesis of a divine and human nature, adherents of this doctrine remained a source of controversy during Justinian's reign. He sought to resolve the issue first by making the Nicaeno-Constantinopolitan creed the sole symbol of the Church and giving legal force to the canons of the first four ecumenical councils.[5] Then in 553, he convened the Second Council of Constantinople, composed of an overwhelming majority of eastern bishops, for the purpose of confirming the creed adopted at the Council of Chalcedon in 451 and reinforcing the rejection of the Nestorian view of the nature of Jesus Christ.[4][6] Although Justinian sought to reunite the Christian Church through this council, it led to further schisms within the Church, particularly between the bishops in the west and those in the western and eastern patriarchal sees.[7]

Around 525 in Constantinople, Justinian married the courtesan Theodora who was approximately 20 years younger than him. She had previously been his mistress.[3]

Thanks to Sherri Harder for starting this profile. 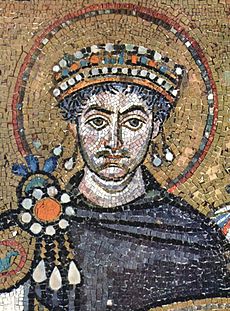 Jack Day
Unknown-194837 and Augustus-79 appear to represent the same person because: The profile of Justinian, husband of Theodora, is well developed. Theodora married only once and is also currently shown married to "Unknown unknown."

Unknown unknown should be merged into Justinian's profile.