For important corrections and additions to the ancestry of James and Joanna (Greenslade) Avery, please see:

This profile is part of the Avery Name Study.

James came to America with his father, Christopher, about 1630.

Joanna was found in Boston in 2 sources: The first volume of admissions of the First Church of Boston contains on page 63 “The 18th day of ye 4th Moneth 1643 Joan Greenslade, a single woman.”

Page 66 shows her dismissal to the church of Gloucester: The 17th day of ye 1st Moneth 1644 our sister Joan Greenslade now ye wife of one James Averill of Gloster had granted hir by ye Churches silence Ires of Recommend to ye Church at Gloster.”

She must have retained a connection to the First Church at Boston for on page 97 of the book of admissions is: “oe Sister Joan Avery wth ye consent of ye whole church was dismist unto ye church of Christ at Pekot on ye 31 of ye 6th mo 1651.”

A Mr. Blyman came to Gloucester and after residing a few years, decided with others to remove to New London, Ct. James Avery came with this group, when he moved his family with 3 children to the Pequot settlement on the mouth of the Thames in 1650, with what was called the Cape Anne colony. James was granted land on 19 Oct 1650, had the 5th lot of 6 acres on Cape Ann Lane. He received grants of land in South Groton. He lived on land allotted to him on the West side of the river until 1656 purchasing other lands. Discovering superior land on the East side of the river, he desired to move there. He resided there 40 years till his death in 1694. This homestead, built on the Poquonnock Plain became known as the Hive of the Averies.

At New London he took an important part in the affairs of the plantation.

He was chosen townsmen in 1660 and held the office twenty-three years, ending with 1680.
He was twelve times deputy to the General Court, between 1658 and 1680, was in the commission of the peace, and sat as assistant judge in the county court.

He was successively, ensign, lieutenant and captain of the only company of train-bands in the town, and was in active service through Philip's War.

1676, captain of one of four companies that protected the frontier;

He removed to Pequonuck, east of the river, between 1660 and 1670, where both he and his wife were living in 1693. Deeds of lands to his sons, including the homestead farm, in Feb., 1693-4, probably indicate the near approach of death. Groton is the principal hive of the family.

The births of three children are recorded at Gloucester; these are repeated at New London, and the others registered from time to time. The whole list is as follows.[1]

His sons Jonathan and Christopher died young, and probably without issue. The descendants of James Jr., Thomas, John, and Samuel are very numerous, and may be regarded as four distinct streams of life. 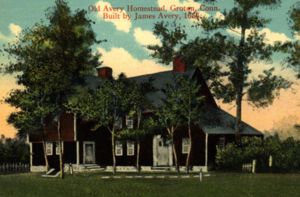 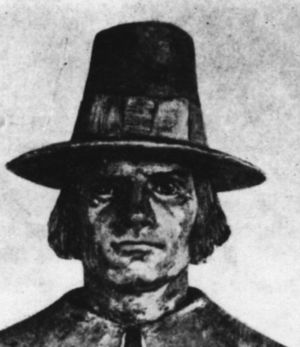 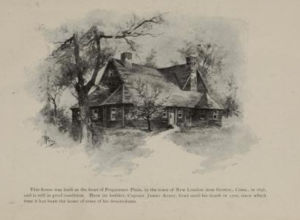