This profile is part of the Avery Name Study.

Because Vermont joined the union as the fourteenth state in 1791, it missed the first federal census by one year. (Although there is a census labeled 1790, it was actually taken one year later.) Avery, Josiah, Event: Lived in: 1776, Place: Gilmanton. [5]

I believe that the record I added in the sources is a reference for his marriage to Anna Avery. The record shows him marrying Hannah Pritchet, and Hannah was often another name for "Anna". Josiah was around 50 years old when they married.Fetterly-28 23:43, 21 November 2020 (UTC)Fetterly-28.

ask our community of genealogists a question.
Sponsored Search by Ancestry.com
DNA Connections
It may be possible to confirm family relationships with Josiah by comparing test results with other carriers of his Y-chromosome or his mother's mitochondrial DNA. However, there are no known yDNA or mtDNA test-takers in his direct paternal or maternal line. It is likely that these autosomal DNA test-takers will share some percentage of DNA with Josiah: 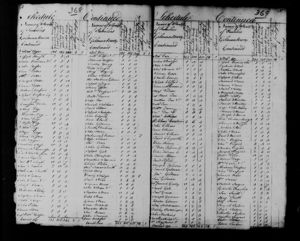