This Benjamin Franklin Avery was the second child of Abigail (Smith), second wife of Daniel Avery. He married Susan Howes Look in 1844 in Utica, New York [b. 27 Oct 1817 @ Conway, MA, Daughter of Polly (Loomis) & Samuel Look]; they had 6 children.

Transcription from The Groton Avery Clan, p. 461 etc.: Benjamin F. Avery graduated from Union College in 1822; studied law and was admitted to the bar in New York City. His early experience on his father's farm had convinced him that the plow then in use could be much improved and he turned his attention in that direction.

His first business venture was at Clarksville, Va., where, in connection with Caleb H. Richmond, he built a foundry for the manufacture of plows. Failing to secure the renewal of their lease, they moved their establishment to Milton, N. C., and later settled at Meadville, Va. In 1842, Mr. Avery became the executor of his father's estate, terminated his partnership at Meadville, sold his Virginia property to a younger brother, and returned to Aurora [N.Y.].

After his marriage, he bought and rebuilt the family homestead at Aurora.

In 1846, Louisville was chosen as an eligible place for a plow factory and soon became Mr. Avery's permanent home. He built a large factory there, but the civil war destroyed his business and his buildings were used by the government as a hospital. The cause of the Union was dear to his heart, his loyalty endangering his property if not his life- as was predicted. After the war, he formed a partnership with his sons and his son-in-law, John C. Coonley, under the firm name of B. F. Avery & Sons. The venture was very successful and the Avery plow lightened the work of the farmer north and south.

In 1869, Mr. Avery, with his wife and four children, went to Europe where they remained two years. After his return, he lived in quiet happiness with his family, an ideal husband, father, and friend. He was able to surround his family with such treasures as wealth and refinement could procure. For years, a part of each summer has been spent by the family at Wyoming, N.Y. He was a Presbyterian of liberal views and an elder of the church. He was straightforward and honest, and was charitable both in giving money and in thinking no evil. Mr. Avery was peculiarly happy in his marriage. 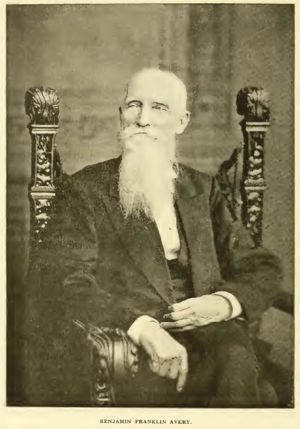