[send private message]
Profile last modified 9 Mar 2022 | Created 30 May 2011
This page has been accessed 527 times.
The Birth Date is a rough estimate. See the text for details.

birthdate estimated from age 21 at marriage

maybe he was the ship's carpenter, as he was sailing in a wooden ship?

HMS Ville de Paris was a 110-gun first rate ship of the line of the Royal Navy, launched on 17 July 1795 at Chatham Dockyard. She was designed by Sir John Henslow, and was the only ship built to her draught. She was named after the French ship of the line Ville de Paris, flagship of François Joseph Paul de Grasse during the American Revolutionary War. That ship had been captured by the Royal Navy at the Battle of the Saintes in April 1782, but on the voyage to England, as a prize, she sank in a hurricane in September 1782.

She served as the flagship of John Jervis, 1st Earl of St Vincent with the Channel Fleet. Later, Admiral Collingwood died aboard her of cancer while on service in the Mediterranean, off Port Mahon, on 7 March 1810. 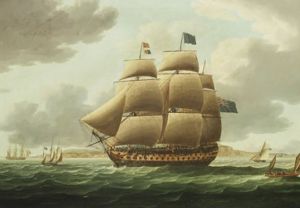