João I (Avis) de Portugal is a member of the House of Aviz.

PHILIPPE OF LANCASTER (or FILIPA DE LENCASTRE) born at Leicester 31 March 1360. Philippa married, JOAO I Of PORTUGAL, at Oporto 11 Feb 1387, illegitimate son of Pedro I, King of Portugal and Algarve, by his mistress, Teresa Gille Lourenco. He was born at Lisbon 11 April 1358. They had six sons, and three daughters. By a mistress, Inez Pires Esteves, he also had one illegitimate son, Affonso [Count of Barcellos, Duke of Braganza] and one illegitimate daughter, Beatrice (or Beatriz) (wife of Thomas Arundel, K.G., K.B., Earl of Arundel and Surrey [see FITZ ALAN 12.vii], and John Holand, K.G., Duke of Exeter, Earl of Huntingdon and Ivry [see EXETER 11]. Philippe (or Filipa), died at Odivellas 19 July 1415. JOAO I, King of Portugal and the Algarve, senor of Ceuuta, died testate 14 August 1433, and was buried with his wife at Batalha Abbey, Portugal. Descendants include, Queen Katherine of Aragon, 1st wife of Henry VIII, King of England [see TUDOR 15], and Queen Henriette Marie (otherwise known as Queen Mary), wife of Charles I, King of England.

Child of Philippe (or Filipa) of Lancaster, by Joao I of Portugal:

• ISABEL (or ISABELLA) OF PORTUGAL, born at Evora 21 Feb. 1397. She married at Sluis 7 Jan. 1430 (as his 3rd wife) PHILIPPE III le bon, Duke of Burgundy, Lorraine, Brabant, and Limburg, Count of Flanders, Artois, Hainault, Holland, Zeeland, and Namur. He was born at Dijon 31 July 1396. They had three sons, Antoine (or Anton), Josse, and Charles, K.G. [Duke of Burgundy, Lorraine, Brabant, Limburg, and Luxembourg]. Philippe III, Duke of Burgundy died at Brugge 15 June 1467, and was buried at Chartreuse de Champmol at Dijon. His widow, Isabel (or Isabella), Duchess of Burgundy, died at Aire (Pas-de-Calais) 17 Dec. 1471.

John I of Portugal

bur: Chapel of the Founder, Monastery of Batalha, Batalha, District of Leiria, Portugal

p. Peter (Pedro) I of Portugal and his mistress Teresa Lourenço.

Sponsored Search by Ancestry.com
DNA Connections
It may be possible to confirm family relationships with João I by comparing test results with other carriers of his Y-chromosome or his mother's mitochondrial DNA. Y-chromosome DNA test-takers in his direct paternal line on WikiTree:

Images: 3
João I of Portugal and the Algarve Image 1 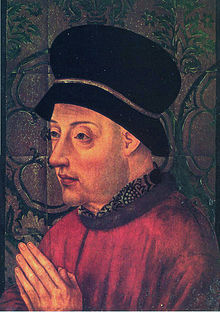 The Battle of Aljubarrota (Castile vs Portugal, 1385) 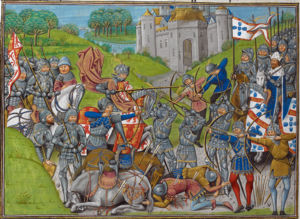 Leave a message for others who see this profile.
There are no comments yet.
Login to post a comment.
[Living Sälgö]
.
posted Aug 18, 2016 by [Living Sälgö]

João I is 21 degrees from Donald Howard, 17 degrees from Julia Howe and 5 degrees from Henry VIII of England on our single family tree. Login to find your connection.