As a clergyman, he was bound to chastity, and as such, had no children to succeed him, and thus an end to the Royal House of Aviz. His death led to the Portuguese succession crisis of 1580 and ultimately to the 60-year Iberian Union that saw Portugal share a monarch with that of Spain.

The next independent monarch of Portugal would be John IV, who took the throne after 60 years of Spanish rule.

Born in Lisbon, Henry was the fifth son of King Manuel I of Portugal and Maria of Aragon.

As the younger brother of King John III of Portugal and a younger son in the Royal Family, Henry was not expected to succeed to the Portuguese throne.

Early in his life, Henry took Holy Orders to promote Portuguese interests within the Catholic Church, then dominated by Spain. He rose fast through the Church hierarchy, becoming in quick succession Archbishop of Braga, Archbishop of Évora and Grand Inquisitor before receiving a Cardinal's hat in 1545, along with the Titulus Ss. Quattuor Coronatorum. From 1564 to 1570 he was Archbishop of Lisbon. Henry, more than anyone, endeavoured to bring the Jesuits to Portugal to employ them in the colonial empire.

Henry served as regent for his great-nephew King Sebastian, replacing his sister-in-law and Sebastian's grandmother Queen dowager Catherine, following her resignation from the role in 1562. King Sebastian died without an heir in the disastrous Battle of Alcácer Quibir that took place in 1578, and the elderly cardinal was proclaimed king soon after. Henry sought to be released from his ecclesiastical vows so he could take a bride and pursue the continuation of the Avis dynasty, but Pope Gregory XIII, not wanting to antagonize Philip II of Spain, did not grant him that release.

The Cardinal-King died in Almeirim, on his 68th birthday, without having appointed a successor, leaving only a regency to care for the kingdom. One of the closest dynastic claimants was King Philip II of Spain who, in November 1580, sent the Duke of Alba to claim Portugal by force.

Lisbon soon fell, and Philip was elected king of Portugal at the Portuguese Cortes of Tomar in 1581—on the condition that the kingdom and its overseas territories would not become Spanish provinces" (wikipedia excerpt).

Is Henry I your ancestor? Please don't go away!

ask our community of genealogists a question.
Sponsored Search by Ancestry.com
DNA Connections
It may be possible to confirm family relationships with Henry I by comparing test results with other carriers of his ancestors' Y-chromosome or mitochondrial DNA. Y-chromosome DNA test-takers in his direct paternal line on WikiTree: 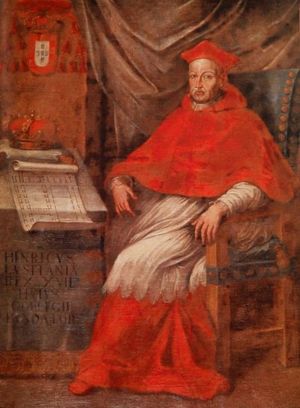 Henry I is 21 degrees from Donald Howard, 16 degrees from Julia Howe and 3 degrees from Henry VIII of England on our single family tree. Login to find your connection.