Presidential First Lady. The daughter of a Presbyterian minister, she was the first wife of Thomas Woodrow Wilson, who became the governor of New Jersey and later the 28th US President.

She received her primary education at The Sabbath School in Rome, Georgia and her high school education at the Rome Female College, also in Rome, graduating in 1876. She continued her education through self-study with a focus on art. In November 1881 her mother died and two years later her father suffered a nervous breakdown and was hospitalized in a mental institution and died the following year.

In 1884 she applied and was accepted at the Art Students League in New York City, New York where she studied for a year. After meeting Woodrow Wilson at her father's church in 1883, they developed a romantic relationship and were married at her paternal grandfather's home in Savannah, Georgia on 24 June 1885. She then gave up her career ambition to become an artist and oversaw her husband's academic and political career and her children's primary education.

When her husband was elected as the US President in 1912, she assumed the management of moving from Princeton, New Jersey to Washington DC and taking occupancy of the White House. During her first full three months as First Lady, she hosted over 40 White House receptions, with an average guest list of over 500 people.

She often found escape from her social obligations by attending the theater or the new silent movies, which were beginning to be shown in public theaters, and also made visits to the local art galleries and museums. She expanded the 3rd floor of the White House by putting in five new bedrooms but probably her most enduring contribution to the Executive Mansion, though short-lived, was the creation of the Rose Garden. She created a private art studio on the 3rd floor of the White House where she continued to paint. She planned the White House wedding of her daughter Jessie in the East Room that occurred on 25 November 1913 and her daughter Nell in the Blue Room on 07 May 1914. After discovering she was afflicted with a terminal kidney disease known as Bright's Disease, she died at the age of 54, becoming the 3rd presidential wife to die in the White House up to that time. [2]

Sponsored Search by Ancestry.com
DNA
No known carriers of Ellen's DNA have taken a DNA test. 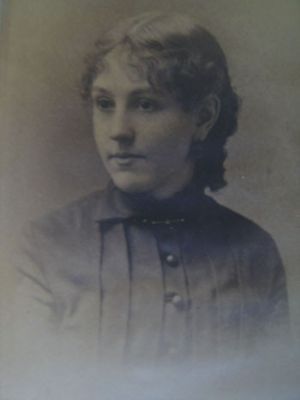 Mrs. Ellen Wilson and her daughters. 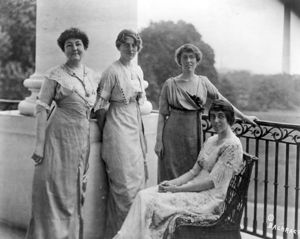 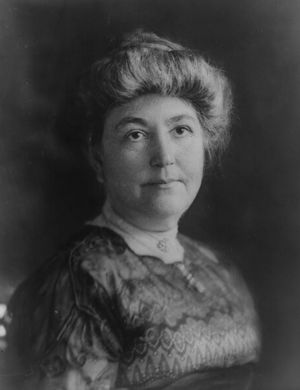