Clarence was born in Rochester, NY on August 24, 1885, to John and Mary Axtell. He was the youngest of nine children.Note1 In 1892 Clarence was six years old. At that time he lived with his father and mother, as well as his brothers Harry and Ray, in Ward 12 of Rochester, NY.[1]It appears that Clarence was raised Christian and was part of the Intermediate Society of Christian Endeavor of Cavalry Church. The society hosted a play in 1899 called "Courting of Mother Goose", in which Clarence played the little bachelor. The play raised money to send a Zulu boy to missionary school.[2]

The 1900 census occurred when Clarence was fifteen years old. The census notes that Clarence was attending school.[3]

In 1904, Clarence was around eighteen years old and a working adult. He worked as a clerk at Sibley, Lindsay & Curr Company, located at 250 Main East, still living out of his family home[4] Note 2. He continued going to school, possibly attending night classes which were a popular option at the time.[5] Over the course of his schooling, Clarence learned how to both read and write.[6] When he was nineteen years old, he probably graduated or stopped attending classes due to his age. He seemed to have a steady job, so pursuing education beyond what was required was not necessary.

As an adult, Clarence appears to have kept his circle of friends. In 1907, he had the honor to be a groomsman at the wedding for George Suter and Albertena Busch.[7]

Tragedy struck on October 22, 1909 when Clarence's mother passed away. Mary was 65 years old.[8][9] This is probably the reason for Clarence being out of work for five weeks.[6] It is also possible that he fell sick himself or was simply in between jobs. After his mother's death, Clarence lived with his brother Harry and Harry's wife Eva. Their house is located in Rochester's 5th Ward. Clarence still worked as a dry goods salesman.[6]

Sometime during 1910 or 1911, Clarence fell sick. He had pulmonary phthisis, commonly known now as tuberculosis.[10] On May 25, 1911[11] Clarence's passed away in Harry's house due to the disease.[12] Clarence was aged 24 years and 9 months.[10] He shares a grave marker with his brother Harry. The marker has an inscription for "Woodsmen of the World", which is a life insurance fraternity. [13]

Place of work found by cross referencing Clarence's employment address given in the directory with the business addresses found in the business directory. Sibley's is found under "Dry Goods". The store was large and spanned across addresses. It was assumed that since 250 fell in the range, that Sibley's was where Clarence worked.

More records on Clarence Axtell may be available offline. Schedule a free consultation with our friends at Trace.

ask our community of genealogists a question.
Sponsored Search by Ancestry.com
DNA
No known carriers of Clarence's ancestors' DNA have taken a DNA test. 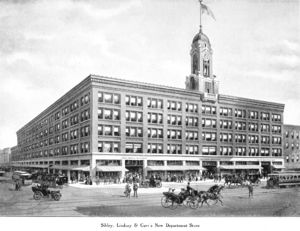 Woodsmen of the World Inscription 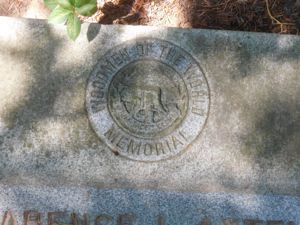 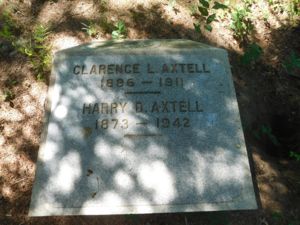