122 Samuel Ayer, born 11 November 1654 in Haverhill. He lived in Haverhill, his name appears on the list of those who built cottages in 1677, he was made a freeman in May of 1683. He served in King Philip’s War serving under Lieutenant Benjamin Swett in June of 1676. and was constable of Haverhill in 1689. When the General Court of Massachusetts issued a citation for the town to appear and answer to the charge of “withholding the one-half of their proportion of rates,” it was Samuel Ayer who responded by letter dated 11 February 1689, “I pray you consider our poor condition. There are many that have not corn to pay their rates, more which have not money; to strain I know not what to take: we are a great way from any market, to make money of anigh thing we have: and now there is not anigh way to transport to other places: I pray consider our poor condition.” In 1695, Haverhill determined a need for a Town Treasurer, Captain Samuel Ayer was chosen to fill the office. In 1700 he was the person appointed to the committee for the “examination of the rights of any in common land” filling a vacancy caused by the death of number 15, Peter Ayer. His name also appears in the list of “snow-shoe men”. Samuel was a popular name for the Ayer family of this generation, this Samuel married Mary (Sarah?) Johnson on 14 December 1681, and was the 54 year old Captain Samuel Ayer killed by the French and Indians in Haverhill when they surprised the town on 29 August 1708. Captain Ayer was the Commander of the Haverhill town garrison house at the time of his death. The garrison house was a square brick building intended to provide security to the town inhabitants during an Indian attach and was built by the town in 1690. It stood on the opposite side of the Great Road, now Mills Street, from the Ayer farm. The History of Haverhill by Chase, reports that immediately after the attack, “Captain Samuel Ayer, a fearless man and of great strength collected a body of about twenty men, and pursued the retreating foe. He came up with them just as they were entering the woods, when they faced about, and though they numbered thirteen or more to one, stil Capt. Ayer did not hesitate to give them battle. These gallant men were soon reinforced by another party, under the command of his son: and after a severe skirmish which lasted about an hour, they retook some of the prisoners, and the enemy precipitately retreated, leaving nine of their number dead. Capt. Ayer was slain before the reinforcement arrived. he was shot in the groin, and being a large, robust man, bled profusely. When his son arrived, he was told that his father was killed, and the informant pointed him out. he looked at the corpse awhile, as it lay on the grass, all covered with blood, and told his imformant that that person could not be his father, for he (meaning the person slain) had on a pair of red breeches. Capt. Ayer was buried near Rev. Benjamin Rolfe, Capt. Wainright and Lieut. Johnson, who were killed the same day. The inscriptions on their stones have become nearly illegible.” Mr. Chase also reports that Capt. Ayer “was one of the most worthy, active and intelligent citizens of the town.” Mary (Johnson) Ayer died on 8 January 1744-5. (Note: In 1704, the General Court of Essex County ordered 125 pair of snow-shoes for use by the North Regiment of the county. The men who were issued this equipment were listed as the “snow-shoe men”. 

ma-vitalrecords.org Capt. Samuel Ayer is Elizabeth Ayer's younger brother. Eliz. married John Clement, and was the mother of Job Clement. "Samuel, Haverhill, s. of Robert, freeman 1683, m. Eliz. d. of Simon Tuttle, the first, had Obadiah, H.C.[Harvard College] 1710; John; and James; was the chief selectman, and k. by the French and Ind. when they surpris. the town 29 Aug. 1708." Savage P.84/85, Vol 1. Was on the list of those who built cottages in 1677, and was constable of Haverhill in 1689.  He and his brother Timothy married Peter Johnson's daughters.

History of Haverhill by Chase

There are actually three men with the name Samuel Ayer of the same generation, all born in Haverhill or nearby Newbury, Mass. Please see this link for a discussion and be very careful about following online trees, which have mixed up the families of these three men. See this discussion in the G2G forum: https://www.wikitree.com/g2g/68073/the-problem-of-the-three-men-named-samuel-ayer - Kyle Dane, 4 Mar 2014.

ask our community of genealogists a question.
Sponsored Search by Ancestry.com
DNA Connections
It may be possible to confirm family relationships with Samuel by comparing test results with other carriers of his Y-chromosome or his mother's mitochondrial DNA. Y-chromosome DNA test-takers in his direct paternal line on WikiTree: 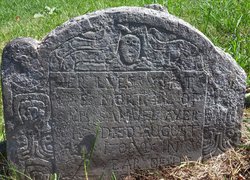 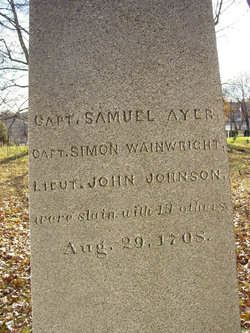