He was the son of Michel Bégon, IV b=1604 d=17 Aug 1683 & his wife Claude Viart. The Bégon family came from the region of Blois, France where they owned seigneuries (such as La Picardière). They had a history of service to the King of France as fiscal and judicial officers until the mid-17th century. They were an established court family, producing as many justices as finance ministers (2 great-uncles were avocat and conseiller to the présidial of Blois, and Michel V's father & grandfather were receveurs des tailles).

He was first cousin to Marie Charron (daughter of Jacques Charron & Marie Bégon) whose marriage on 14 Dec 1648 to Jean-Baptiste Colbert moved the family into the occupations of maritime & colonial administrators.

He married on 16 Feb 1665 at Blois to (Marie) Madeleine Druillon (daughter of Pierre, maître in the Chambre des comptes of Blois). She was baptized on 29 Mar 1645 in St.Solenne parish & she died in the same town on 25 Dec 1697. Their children's marriage alliances were advantageous for the family's descendants.

In 1662 Michel V became garde des Sceaux of the présidial of Blois.

In 1667 he became president of the tribunal.

In 1677 he entered the naval administration when Colbert made him treasurer of the marine du Levant at Toulon.

Later he left the shores of the Mediterranean for north-western France, becoming commissaire général de la marine at Brest on 24 Nov 1680 then in 1681 at Le Havre.

His brother-in-law Jacques de Meulles was intendant of New France from 1682 to 1685.

On his return from the Antilles, he won a new post with the Levant fleet which he had awaited since 4 Nov 1684, the date of his nomination to the post of intendant des galères at Marseille.

He was a French ancien regime official & intendant of the généralité of La Rochelle - one of the great intendants of the reign of Louis XIV ...

He was also a passionate plant collector & one of the noted collectors and naturalists of his day. He met the naturalist Charles Plumier in the Antilles, and Plumier later named the decorative plant, the begonia after him. 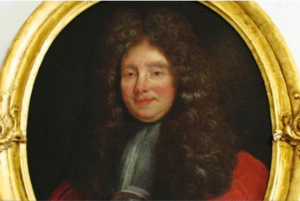 Michel is 16 degrees from Danielle Liard, 22 degrees from Jack London and 14 degrees from Henry VIII of England on our single family tree. Login to find your connection.