Born in Detroit and baptized on August 25, 1763 at Fort Pontchartrain,[1] James' family moved across the river to Sandwich when the Americans took control of the city. Appointed to the Legislative Council of Upper Canada in 1792, he was appointed a judge of the Western district the following year.

Col. Baby was commanding officer of the 1st Kent Militia during the War of 1812. After the war, he was appointed Inspector General and he moved to the capital of Upper Canada at York, where he continued as an active member of the Family Compact.
A slaveowner, he opposed Lieutenant Governor John Graves Simcoe's attempts to prohibit slavery in Upper Canada.

He married twice and had five sons and one daughter. He was a widower for the last twenty years of his life. 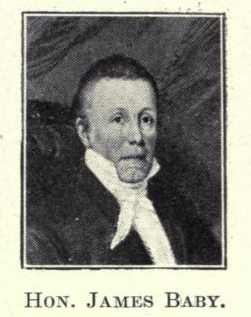 Greg Lavoie
Jacques Baby's baptism is viewable on FamilySearch, albeit without the usual citation feature. See the link below:

Dave Rutherford
Detroit was never part of Lower Canada. After the conquest, the British established the colony of Province of Quebec to cover all previous French territory. It extended to the Mississippi. Upper and Lower Canada came into being in 1791, around the time that the British handed Detroit over to the Americans.
posted Feb 14, 2018 by Dave Rutherford
Tanya Quinn
Was Province of Quebec not called Lower Canada when James was born?
posted Feb 14, 2018 by Tanya Quinn

Categories: Members of the Legislative Council of Upper Canada | 1st Regiment of Kent Militia, Canada, War of 1812 | War of 1812