Edmund was born about 1641, either in England, or in New Kent County Virginia. He married on 19 May 1692 in New Kent County to Ann Lydall. [1] Her father, George Lydall, gave them land that would be the Bacon plantation for years. They are "said to have had four daughters...and two sons, Edmund and John, who is the only male descendant of record in New Kent County. Edmund Bacon, the second, probably died in his youth..." [2]

"There would appear to be some question as to the ancestry of William Bacon (removed as father of this Edmund Bacon) as well as the fact of Capt. Edmund Bacon being his son. This ancestry has been accepted by a great many descendants; however, more proof would be welcome." [3]

"It is a matter of debate where and when Edmund Bacon was born and who his parents were. Some sources say that he is the son of William Bacon and grandson of Sir James Bacon (1545-1618) of Friston Hall, Suffolk, England. Other sources state that he is the son of Thomas Bacon (1615-1656), son of the Reverend James Bacon (1591-1670) and Martha Woodward whose sister, Bridget Woodward, was married to Sir Thomas Lyddall (d.1627). Sir Thomas Lyddall was the father of Col. George Lyddall. I agree with this latter connection which would make Edmund Bacon and Ann Lyddall cousins. We know for sure that Edmund did not descend from Nathaniel Bacon, “The Rebel”, as he died leaving only daughters and was not old enough to have been Edmund’s father. Also, Col. Nathaniel Bacon, the Governor of Virginia, did not have any children. It is believed that Edmund was probably born in England; the Norfolk/Suffolk region which is the ancestral home of the Bacon families. Year of birth is also in debate as no records can be found. Most histories give him the date of 1640, 1654 or 1660. I feel 1640 is too early a date and 1660 a little too late so I accept the date of 1654. This falls in line with the death of Sir Thomas Bacon who died in 1656. Also, this would make him about equal in age to his wife Ann Lyddall. I feel they were probably married sometime about 1680/81." [4]

One source says Edmund patented land in 1687 (October 21st) on the Pamunkey River, naming as "headrights" or immigrants, Anne Lyddall and Thomas Bacon, possibly his wife and a son (also Katherine Davis, Nathaniel Smith and George Pargeter [3]. Another source, and these accounts perhaps do not cancel each other, states that Anne's father gave Edmund in the marriage contract 1,700 acres on Black Creek in the narrows of the York River.

Edmund was for a time sheriff of New Kent County and a vestryman of St. Peters Parish. He was a relative of (some say cousin), [5] but could not have been the son of Nathaniel Bacon, "The Rebel" since Nathaniel had no surviving children. In 1682, Edmund received 6,000 pounds of tobacco as payment for keeping 40 soldiers at his own expense at the Mattaponi fort before he was ordered to reduce the garrison.

Children of Edmund and Anne (not necessarily in this order) were:

Sponsored Search by Ancestry.com
DNA Connections
It may be possible to confirm family relationships with Edmund by comparing test results with other carriers of his Y-chromosome or his mother's mitochondrial DNA. However, there are no known yDNA or mtDNA test-takers in his direct paternal or maternal line. It is likely that these autosomal DNA test-takers will share some percentage of DNA with Edmund: 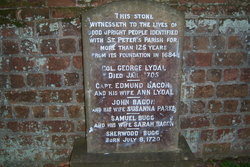 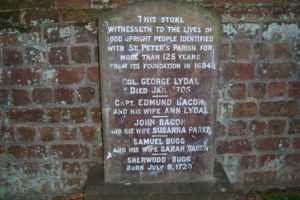 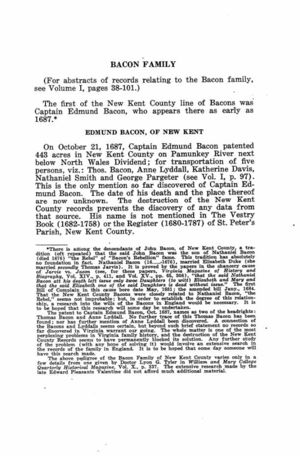 Mary Gresham
Why not add the profile for Thomas Bacon, MP son of Rev. James Bacon as the father of this Edmund and put the notes from this bio into the new profile of Thomas, MP to assist people in their research. Just leaving Edmund hanging out there doesn't seem to make sense. The close family ties to Lyddall's in England and in Virginia are strong evidence.
posted Jan 26, 2020 by Mary Gresham
edited Jan 26, 2020 by Mary Gresham

Topher Sims
Bacon-2690 and Bacon-2404 appear to represent the same person because: Duplicate with same parents, spouse, children, dates, and locations
posted Aug 03, 2018 by Topher Sims
Vicki Smith
Thanks so much for your work on this. I'm descended from Ludwell Bacon, another of Harwood Bacon's sons
posted Nov 07, 2014 by Vicki Smith