Nathaniel Bacon is a Qualifying Ancestor of the Jamestowne Society

Nathaniel Bacon is best known as the man who led an uprising against colonial Virginia Gov. William Berkeley in 1676, which collapsed when Bacon died from dysentery. He was born to to wealthy merchant parents Thomas Bacon and wife Elizabeth Brooke Bacon & was educated at Cambridge University.

After accusations that Nathaniel cheated another young man of his inheritance, Thomas Bacon sailed into exile across the Atlantic to the colony of Virginia. He settled near Williamsburg & bought two frontier plantations on the James River. Since his cousin was a prominent militia colonel and friend of governor William Berkeley, Bacon settled in Jamestown, the capital. Soon Bacon was himself appointed to the governor's council. Berkeley's wife, Frances Culpeper, may also have been Bacon's cousin by marriage.

Arthur Allen, a wealthy Englishman, arrived in Jamestown in the 1630s and obtained land across the James River in Surry County, where he cultivated tobacco. His enterprise prospered and by 1665 he completed construction of the building. By 1676 the Allen family’s land holdings had increased to 1,000 acres. Surviving documents listed eleven indentured servants and four African slaves in the household around that time.

Allen’s son, Arthur Allen II, was known as one of the wealthiest planters in the colony. The house is said to be the seventh largest in Virginia at that time, and it was possibly the first to have a formal English garden. (There are only archaeological traces of it now.) Allen cultivated the native Norton grape and was wealthy enough to import from Germany glass wine bottles embossed with his initials. He served in the House of Burgesses and was a confident of Governor William Berkeley. When the rebellion led by Nathaniel Bacon broke out, Allen sided with the Governor.

Bacon, like the elder Allen, was the son of an aristocratic English family, although he apparently left the old country in some ill repute. The father of his bride, Elizabeth Duke, disapproved of the marriage and disinherited them both. Bacon settled in eastern Henrico County, then the Virginia frontier, around 1674. Family connections allowed him entre into the highest levels of colonial society, but he soon came into conflict with Berkeley over Indian policy. The Susquehannock Indian tribe was migrating south to escape the marauding of the Iroquois. At some point the Indians raided one of Bacon’s plantations and killed an overseer. Bacon organized other frontiersmen — mostly small farmers also suffering from Indian raids — and carried the battle to the Indians. That set him in direct conflict with Berkeley, who counseled peace with the Indians. Nathaniel Bacon -- he was one dapper dresser! Once revered as a revolutionary predecessor to the founding fathers, Bacon now is reviled by progressive historians projecting 21st-century sensibilities into the 17th century, as an anti-Indian racist.

Nathaniel Bacon — he was one dapper dresser! Once revered as a revolutionary predecessor to the founding fathers, Bacon now is reviled by progressive historians, projecting 21st-century sensibilities into the 17th century, as an anti-Indian bigot. Simplistic history forced into a mold. Preservation Virginia tells a more nuanced story.

Bacon then marched on Jamestown, the capital, collecting assorted indentured servants, free blacks, slaves and other disreputable elements, chased Berkeley to a refuge on the Eastern Shore, pillaged plantations and razed Jamestown. Although many historians have portrayed the rebellion in class-warfare terms, the picture was more complicated. While Allen sided with Berkeley, other Surry planters joined Bacon against the Governor, who had raised taxes to defend against the Dutch while neglecting the frontier.

Allen evacuated with Berkeley to the Eastern Shore, and Bacon dispatched some 70 rebels to occupy his home. It was that association that led to the name Bacon’s Castle.

When the rebellion collapsed the Allen family reoccupied the plantation and, like other planters, shifted to a slave workforce. Bacon’s Rebellion marked a turning point in the nature of slavery. Before the rebellion, there was little formal difference in status and rights between slaves and indentured servants. After the rebellion, the industrial revolution began sucking up the landless laborers from the English countryside and fewer signed up as indentured servants. Planters turned to African slaves to work their plantations and codified the law establishing race-based slavery.

Among other notable characters to live in the Allen house was Elizabeth Bray, who married Arthur Allen III. She resided in the house six decades, out-living three husbands as well as her children. She was an accomplished businesswoman, not only running the plantation and updating Bacon’s Castle with a Georgian-style makeover but she lent money to other tobacco planters. She also was a shrewd negotiator. She signed a contract with one of her husbands providing for her estate to be left to her children if she died, but she inherited his estate when he died. Which he did.

The woman with many names

Though he became a justice of the Surry County Court, his wife, Elizabeth Bray, gets more ink in history books.

The two married in 1711, and she started renovating her new home, making it even more elegant. She was responsible for installing the interior wall on the first floor that separates the hall and living chamber and creates the center passageway that visitors now walk through.

The raised paneling installed in the main chamber, new windows, and closets on the first floor are also her touches.

She became a widow with two young children when Arthur III died in 1727. She was soon romanced, however, by wealthy merchant Arthur Smith, the son of the man for whom the town of Smithfield is named.

He proposed matrimony and she agreed, but only if he agreed to her insistence on what we might call a prenup, said Joanna Braswell, site coordinator for Preservation Virginia.

Smith had to point out in the marriage contract that she had more money than he, and that he promised to pay her a tidy sum upon his death and give each of her children an equal amount. In addition, her money would be considered separate from his estate, which she also expected to receive a portion when he died.

He agreed, and they had a son together, though the youngster drowned in a creek when he was about 11.

Mrs. Smith used her money to start a school in Smithfield where boys would be taught reading, writing and math, and girls would learn reading and writing and household affairs.

When her second husband died in 1754, she had the marriage contract enforced and married again around 1760. She became Elizabeth Bray Allen Smith Stith when she was in her 60s.

She died around 1774 and provided for her grandchildren and great-grandchildren, since she outlived her own children. She ruled Bacon's Castle for 63 years, longer than any other resident. The Ginna era

The Hankins family, headed by planter John Henry Hankins, would change much of the look of the house as we see it today.

Hankins bought the property in the mid-1840s from an owner who had purchased it at auction - the first time the house and its lands had moved out of family hands.

When Hankins purchased it, the castle was already considered an "ancient landmark."

He and his wife, who hailed from Surry and had grown up near the property, had a large family - seven boys and two girls. A smaller wooden home, which had been built onto the house before 1800, was moved to the right of the castle. It now serves as the caretaker's home.

In its place, Hankins built a neoclassical addition, and connected it to the original structure by what's known as a two-story "hyphen," which had covered porches. He also changed out the windows and plastered the walls.

The name of his wife, Louisiana, is etched in cursive in one of the glass window panes on a first-floor living room. Braswell said it was the custom of the day for women to test whether their engagement rings were diamonds or the cheaper glass crystal by trying to carve their initials in glass.

There is no record that Louisiana was doing this, however. Besides, her husband seemed wealthy enough to afford the real thing. He expanded the land by several hundred acres, moving from tobacco to wheat and garden crops. Records show he had 82 slaves to do the work and they lived in 19 slave quarters on the property. (One of the houses has been restored and remains.)

One of the Hankinses' most interesting legacies was their oldest daughter, Virginia, who was often called Ginna. She was known as much for her exceptional beauty as for her intellect. She studied in Richmond private schools and learned to read and write in German, Latin and French. She wrote poetry and completed a book that was never published.

During the Civil War, a Confederate soldier stationed at Norfolk and then nearby Fort Boykin became a frequent visitor at the castle and found a kindred soul in Ginna. He, too, was a writer, Sidney Lanier. The two fell in love and he proposed marriage.

Ginna declined the proposal, feeling an obligation to stay in Surry and care for her siblings; her mother, Louisiana, had died on the day that Robert E. Lee surrendered to the North in April 1865. With the end of the war came the end of slavery, and the Hankinses' hold on the estate. The family could not afford to pay for people to work the land. The house went on the auction block.

Lanier moved back to Georgia, married, made a living out of writing and referred to southeastern Virginia in his work. He became so popular that Lanier County, Ga., was named in his honor. The two poets reportedly continued to write to each other.

Ginna traveled through her adult life, never married and died in Richmond in 1888. But her time at Bacon's Castle has become a part of the property's rich history. 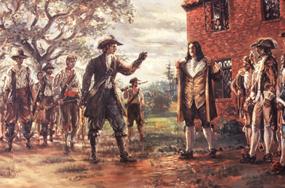 Note to Ballard from Nathaniel Bacon 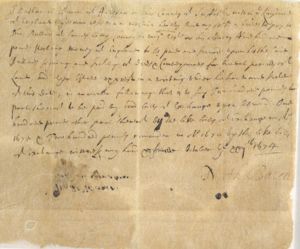 Built in 1665 Bacon’s Castle is one of the most architecturally significant buildings in Virginia. It is the oldest standing brick edifice in the English colonies. It also happens to be the only surviving example of Jacobean architecture on the North Am

Leave a message for others who see this profile.
There are no comments yet.
Login to post a comment.
Angela Lane
Anne Bassett was the first wife of Nathaniel Bacon 1620-1692 as shown in his biography on the Encyclopedia Virginia website. John Nathaniel Bacon was not the son of Nathaniel Bacon and Elizabeth Duke. Elizabeth and her second husband Thomas Jarvis were involved in a court case in the 1680s. The children of Nathaniel and Elizabeth are mentioned, Elizabeth and Mary. At the time of the court case, Elizabeth had died without issue and it was Mary who married Dr. Hugh Chamberlain.
posted Feb 08, 2021 by Angela Lane
Anonymous Roach
There is information out there that Thomas Warren bought the Bacon house from John Rolf' s son. Do you know if there actually was a conection at all to the Warrens. Hunnicutt-11 was Warren-1125 son in law. Is this the property that is also called Smith's Fort?
posted May 26, 2015 by Anonymous Roach
Anonymous Roach
Hey Douglas, would you happen to know if John Hunnicuut-11 is a cousin of Nathaniel. My father mentions a familial relationship in his papers. But mold and critters have damaged the words. If you should run across anything I'd appreciate it if you'd send me a holler. Great profile.
posted May 26, 2015 by Anonymous Roach