Joan Ruth Bader was born on 15 March 1933 in Brooklyn, New York City, New York. Her parents were Cecilia Amster and Nathan Bader, who lived in the Flatbush neighborhood.

Her father was a Jewish emigrant from Odessa, Ukraine (then in the Russian Empire) and her mother was born in New York to Austrian Jewish parents.

The family nicknamed her "Kiki" for being "a kicky baby." When Ruth was 14 months old, her older sister, Marylin, died of meningitis at age six.

When she started school, her class had several other girls named Joan, so her mother Celia suggested that the teacher call her daughter "Ruth" to avoid confusion.

The Bader family belonged to the East Midwood Jewish Center, a Conservative synagogue, where Ruth learned tenets of the Jewish faith and gained familiarity with the Hebrew language.

She attended James Madison High School while her mother Celia struggled with cancer. Her mother died the day before Ruth's high school graduation when Ruth was 17.

Although Bader was raised in a Jewish home, she became non-observant after the death of her mother, when she was excluded from participating in a mourners' event because of her gender.

On 23 June 1954 she graduated with a Bachelor of Arts degree in government from Cornell University in Ithaca, New York.

With her husband's encouragement, in the fall of 1956 she started law school at Harvard University, where she was one of only nine women in a class of about 500 men.

When her husband took a job in New York City, she transferred to Columbia Law School, where in 1959 she graduated, tied for first in her class.

Because of her gender she encountered difficulty in finding employment in the male dominated field of law.

She entered academia and was a professor (one of the few women in her field), at Rutgers Law School and Columbia Law School, teaching civil procedure.

She spent a considerable part of her legal career as an advocate for the advancement of gender equality and women's rights, winning multiple arguments before the Supreme Court.

On 14 April 1980, President Jimmy Carter appointed her to the U.S. Court of Appeals for the District of Columbia Circuit and she was confirmed by the United States Senate on 18 June 1980.

On 14 June 1993, President Bill Clinton nominated her as an Associate Justice of the Supreme Court of the United States. She was the second woman and the first Jewish female justice to serve on the Supreme Court. She eventually became the longest-serving Jewish justice ever.

In June 2010 she celebrated her 56th wedding anniversary and a few days later, her husband, Martin, died of complications from metastatic cancer on 27 June 2010.

She died at the age of 87 of metastatic pancreatic cancer on 18 Sep 2020 at her home in Washington, DC, and was buried next to her husband in Arlington National Cemetery. [1]

Is Ruth your relative? Please don't go away!

ask our community of genealogists a question.
Sponsored Search by Ancestry.com
DNA
No known carriers of Ruth's ancestors' DNA have taken a DNA test. 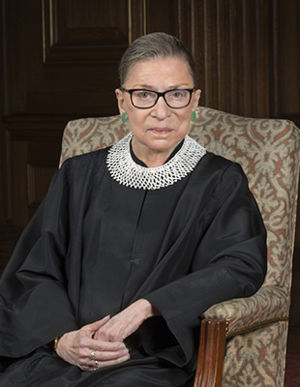 AJ Watland
Wonderful life The Justice was a remarkable person and stood by her faith, family , and the law. Stood up for women and their rights.

Marguerite (Johnson) Brown
Thank you for the excellent biography of this remarkable woman. A close friend of mine experienced the same kind of gender prejudice when she entered law school in 1957 on scholarship. She was the only female in her class. She went on to have a very successful career. Ruth Bader Ginsburg is deserving of a very special place in our nation's history.
posted Oct 07, 2020 by Marguerite (Johnson) Brown

Categories: Arlington National Cemetery, Arlington, Virginia | Associate Justices of the Supreme Court of the US | Notables