Catherine de Baillon was a noble French immigrant to New France. She was born about 1645 in Les Layes, (today Essarts-le-Roi), Île-de-France, France; the daughter of Alphonse Baillon, (Squire and Lord of the Mascotterie) and Louise de Marle.

Catherine de Baillon was among the Filles du Roi, a group of women ordered by the King to be recruited and sent to New France to marry the colony's settlers. She was one of the few Filles du Roi who had noble ancestry. She is the genealogical link between many French Canadians and royal ancestors, including Charlemagne. Catherine being from a noble French family was unusual among the Filles du Roi. Although her father was dead, she still had her mother, her tutors and a brother well-placed at court in France. Although not rich, she still brought a dowry of 1000 livres.

Raymond Ouimet and Nicole Mauger in their book on Catherine de Baillon proposed one plausible explanation.

Jean-René Côté and Anita Seni in their works on Catherine de Baillon show how Catherine's decision to migrate to New France was influenced by Louis-Théandre Chartier, sieur of Lotbinière. Unlike Ouimet and Mauger they do not believe that Catherine was a naughty young woman forced to migrate, but rather she chose to do so based on her social position and family contacts.[6][7]

It is possible that Catherine de Baillon was never confined at La Salpêtrière, as Ouimet and Mauger suggest, and that she joined the King's Daughters of her own free will. Her family was connected to someone associated with the hospital. Her mother, believing that she was not able to provide for Catherine properly may have encouraged her youngest to go to New France with other unmarried young women searching for better opportunities.

Louis Viole, her uncle and tutor to her sisters, Elisabeth and Marie-Claude, had a young aunt, Marie Defita, who may have intervened in favor of Catherine. Marie was better known as Mademoisselle Viole. She was an Assistant and the Treasurer of the Ladies of Charity, an organization that maintained close ties with La Salpêtrière. She was the head of the staff who cared for the women and girls interred at the hospital. Aware of a ship sailing for Canada at the beginning of summer 1669, it is possible that Mademoisselle Viole invited young Catherine to join the girls of La Salpetrière to avoid the costs of the crossing and to travel with the group in safety.

The decision by Catherine to leave for Canada was encouraged by the visit of Louis-Théandre Chartier, a friend and family ally. Visiting France in 1668, Mr. Chartier was able to present to Louise de Marle the many possibilities offered by New France.

Marriage Contract
Catherine de Baillon is probably the daughter of the King who has been most studied by genealogists and historians. This interest is not related to the remarkable facts of Catherine de Baillon in New France but rather by what was revealed in her marriage contract made with Jacques Mivillve signed before the notary Pierre Duquet on 19 October 1669. The contract states that she was "Catherine de Baillon, daughter of deceased Alphonse de Baillon Squire, Sieur de la Mascotterie, and Louise de Marle". The title of his father indicates that he was a noble owner of the seigneury of the Mascotterie. This marriage contract was also the first document in which Jacques Miville was called "Sieur Deschenes". Jacques Miville had been granted land in the seigneury of Lauzon and he may have wanted to make himself more interesting in the eyes of his future wife. The marriage contract specified that Catherine de Baillon had brought from France the sum of 1000 livres of which 300 were placed in the community goods of the couple. It was quite a fortune that Catherine had with her. It is rather intriguing to find this young woman among the daughters of the King who had, for the majority of them, only 50 livres in dowry and which came from the treasury of the King of France.[9][10]

At the office of Notary Duquet, Jacques Miville was surrounded by family members and relatives. Catherine de Baillon was accompanied by Daniel de Remy, Knight of France, Seigneur de Courcelles, and Governor General for the King; Pierre de Saurel, a Captain of the Carignan-Salières regiment; Louie Roüer, Sieur de Villeray, First Counselor of the Sovereign Council; and the Captain of the vessel Le St-Jean Baptiste, Pierre Fillye. In addition to the Governor General, Claude de Boutroue d'Aubigny, the Intendant of New France, signed the contract. The presence of the Governor and the Intendant for the simple signing of a marriage contract may seem astonishing, but attests to the importance of Catherine de Baillon. Catherine had a brother in France who was close to the Royal family. Antoine de Baillon was the Squire of Gaston-Henri de Bourbon, Duke of Verneuil, who was the uncle of King Louis XIV.[11]

After living a few years in the Miville lands in Lauzon, the couple settled on in La Grande Anse, near Rivière-Ouelle.

Catherine and Jacques died a few hours apart in 1688, probably victims of an epidemic. Marie Catherine de Baillon died on 27 Jan 1688 in Rivière-Ouelle, Canada Nouvelle-France, and was buried on 30 Jan 1688. On the burial record, the priest wrote her name "Marie Catherina Bayon."[1]

Sponsored Search by Ancestry.com
DNA Connections
It may be possible to confirm family relationships with Catherine by comparing test results with other carriers of her mitochondrial DNA. However, there are no known mtDNA test-takers in her direct maternal line. It is likely that these autosomal DNA test-takers will share DNA with Catherine: 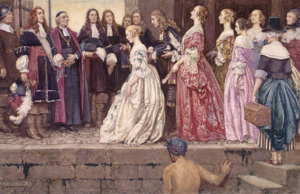 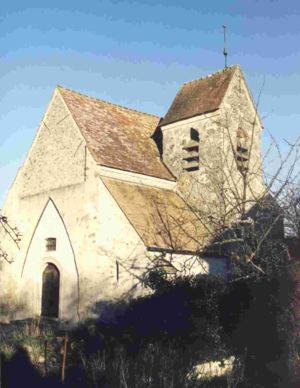 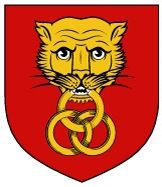 Leave a message for others who see this profile.
There are no comments yet.
Login to post a comment.
James LaLone
For those descended from Catherine de Baillon, the following may be of interest - https://groups.google.com/forum/#!topic/soc.genealogy.medieval/7wiFih_heVc
posted Aug 10, 2018 by James LaLone
[Living Calonnec]
https://acgs.org/Download/ACGS_Baillon_1999.pdf
posted Oct 13, 2017 by [Living Calonnec]
[Living Calonnec]
De Baillon-8 and Baillon-1 appear to represent the same person because: The following was sent via the private messaging system on WikiTree.com.

I thought this e-mail made me a trusted list member for this profile. "Can you merge them as I am not pre 1500 authorised. Thank you, Micheline This message is from Micheline Gadbois (michon28@nb.sympatico.ca). Click here for their WikiTree profile: https://www.WikiTree.com/wiki/Gadbois-46" I am convinced De Baillon-8 and Baillon-1 are the same because Montfort-l'Amaury yvelines fr (cf. marriage certificate) and Les Layes are in the same vicinity (AD78); as I see it, she was born in Monfort-L'Amaury and baptised in the church at Les Layes. I have also reviewed her ancestors and found only minor differences save for Jeanne de la Saussaye's parents which will need to be researched. Please explain more about the trusted list. Cordially Michele

Might be of interest, she died just a few hours after her husband; they both had scarlet fever (fièvre pourpre ou scarlatine)

Baillon-1 & De Baillon-8 appear to be the same person : same parents, both from AD78 (Montford -Lamaury & les Layes) It should be merged Michèle Calonnec

posted Aug 04, 2017 by [Living Calonnec]
James LaLone
Part of her lineage is in the following article (which I don't think is included in this genealogy) - DuLong, John & Jean Bunot, "Catherine de Baillon's de Roye Ancestry; Another Royal Gateway", in Michigan's Habitant History, v. 30 #1, (Jan 2009), pp.5-18.
posted Jan 02, 2017 by James LaLone
Danielle Liard
Note: Filles du Roy had a dowry which was not necessarily monetary, most often being in goods needed to set up a household, their value being 50 livres (or 100 for those marrying officers). The fact of their dowry from the king was not always noted in the notarial marriage contracts, some notaries lumped it with any other dowry they might have had.
posted Jul 30, 2016 by Danielle Liard

Judith Vasseur
This pdf is in French but seems to have a lot of information:

And this pdf, also in French, tells of Catherine de Baillon on page 20: http://www.genealogie-miville-deschenes.com/dossierPDF/LafamilleMivilleDechêneVersionfinale.pdf