Private Thomas Bainbridge was Killed in Action during World War I.

5 June 1917, when Thomas, age 28 and single, registered for the draft, he lived in Webster, Westmoreland County, Pennsylania. He worked as a fire boss at the Ella Mine for the United Coal Operation. He was described as tall, and slender, with grey eyes and brown hair.[2]

Private Bainbridge joined the 80th Division, Company A, 320th Infantry A.E.F. (American Expeditionary Forces), which formed in August 1917. The men of the 80th Division were mostly from Pennsylvania, Virginia and West Virginia. For this reason their Division sleeve insignia[3], was made up of three blue (ridge) mountains, one for each state.[4]

They trained at Camp Lee (now Fort Lee) in Virginia, and when they reached their full strength of 23,000 men, they sailed for France, where they landed June 8, 1918. They "trained with the British Third Army and joined forces on the front lines near the Artois sector with heavy action in the [[Wikipedia:Second_Battle_of_the_Somme_%281918%29 Somme Offensive of 1918] and in the Meuse-Argonne."[4]

Thomas Bainbridge was killed in action, during one of these offensives [5] and is buried in the Monongahela Cemetery, Monongahela, Washington County, Pennsylvania, USA.[6] 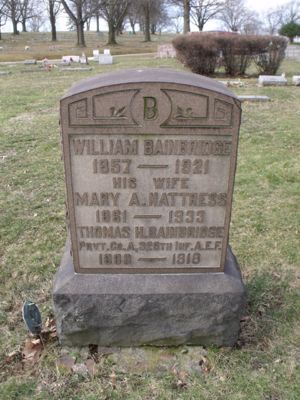