Noel-Baker is the only person to have won an Olympic medal and received a Nobel Prize.

He ran for Great Britain in the 800 metres and 1500 meters at the 1912 Olympic Games in Stockholm, reaching the final of the 1500 metres. He was captain of the British track team for the 1920 Summer Olympics in Antwerp and carried the flag. He won the silver medal in the 1500 metre race behind teammate Albert Hill. He was captain again for the 1924 Summer Olympics in Paris (made famous in the film Chariots of Fire), but did not compete.

He was elected as the member for Coventry in 1929, and served as parliamentary private secretary to the Foreign Secretary Arthur Henderson.

Noel-Baker lost his seat in 1931. He returned to parliament after winning the Derby by-election in July 1936. When that constituency was split in 1950, he transferred to Derby South.

Noel-Baker became a member of the Labour Party's National Executive Committee in 1937. On 21 June 1938, Noel-Baker, as M.P. for Derby, in the run up to World War II, spoke at the House of Commons against aerial bombing of German cities based on moral grounds. "The only way to prevent atrocities from the air is to abolish air warfare and national air forces altogether."

In the coalition government during the World War II he was a parliamentary secretary at the Ministry of War Transport from February 1942, and served as Minister of State for Foreign Affairs after Labour gained power following the 1945 general election. Noel-Baker moved to become Secretary of State for Air in October 1946, and then became Secretary of State for Commonwealth Relations in 1947 and joined the cabinet.

Noel-Baker was the minister responsible for organising the 1948 Olympic Games in London. He moved to the Ministry of Fuel and Power in 1950. In the mid-1940s, Noel-Baker served on the British delegation to what became the United Nations, helping to draft its charter and other rules for operation as a British delegate. He served as Chairman of the Labour Party in 1946–47.

An advocate of multilateral nuclear disarmament rather than a policy of unilateral disarmament, he received the Nobel Peace Prize in 1959. In 1979, with Fenner Brockway, he co-founded the World Disarmament Campaign, serving as co-Chair until he died, and was an active supporter of disarmament into the 1980s.

Noel-Baker stood down as the MP for Derby South at the 1970 general election. His life peerage was announced in the 1977 Silver Jubilee and Birthday Honours and he was raised to the peerage 22 July 1977, as Baron Noel-Baker, of the City of Derby.

In June 1915, Philip Baker married Irene Noel, a field hospital nurse in East Grinstead, subsequently adopting the hyphenated name Noel-Baker in 1921 by letters patent. His wife was a friend of Virginia Woolf. Their only son, Francis Noel-Baker, also became a Labour MP and served together with his father in the Commons. Their marriage, however was not a success and Noel-Baker's mistress from 1936 was Megan Lloyd George, daughter of the former Liberal Party leader David Lloyd George, herself a Liberal and later Labour MP. The relationship ended when Irene died in 1956.

Following Noel-Baker's death in Westminster, aged 92, he was buried alongside his wife in Heyshott, West Sussex. 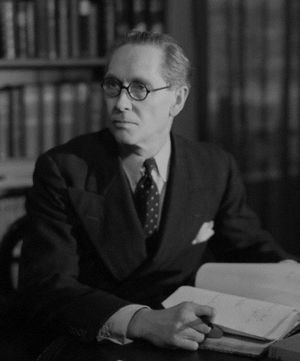 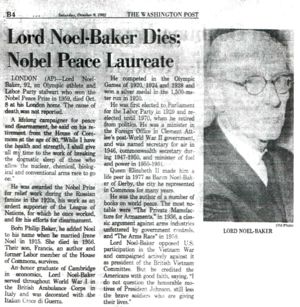 C. Mackinnon
ODNB "During the First World War he served with the Friends' Ambulance Unit in France and in Italy." Always nice to know if someone has a bio there.
posted Mar 19, 2018 by C. Mackinnon