Mary Baker Eddy (1821-1910) was an influential American author, teacher , and religious leader, noted for her groundbreaking ideas about spirituality ..

Mary Morse Baker was born in Bow, New Hampshire, the youngest of six children of Abigail and Mark Baker. She was raised as a Congregationalist.

On December 10, 1843, Mary married George Washington Glover. He died of yellow fever on June 27, 1844, a little over two months before the birth of their only child, George Washington Glover. Mary was then a single mother in poor health. She wrote some political pieces for the New Hampshire Patriot. She also worked as a substitute teacher in the New Hampshire Conference Seminary. It was not easy for a widowed woman to earn money.

She put her son into the care of neighbors by her father and stepmother. Then she married Dr. Daniel Patterson, a dentist, in 1853, hoping he would adopt the young boy. Patterson apparently signed papers to that effect on their wedding day, but failed to follow through on his promise

Patterson ran into financial difficulty. He mortgaged Mary's furniture, jewelry, and books, but was unable to keep current on their property in Groton, Grafton County, New Hampshire, and was eventually forced to vacate. Mary's sister, Abigail, moved her to Rumney, six miles away. Mary and Daniel separated in 1866 and were divorced in 1873.

An experience in 1866, when Mary had a physical healing of serious injuries while reading the Bible, led her to investigate more and more into the system of healing she would eventually term "Christian Science." She devoted the next three years of her life to Biblical study and what she considered the discovery of Christian Science.

Convinced by her own study of the Bible, especially Genesis 1, and through experimentation, Mary claimed to have found healing power through a higher sense of God as Spirit and man as God's spiritual "image and likeness." She became convinced that illness could be healed through an awakened thought brought about by a clearer perception of God and the explicit rejection of drugs, hygiene and medicine based upon the observation that Jesus did not use these methods for healing.

In 1875, after several years of offering her healing method, Mary published her work in a book entitled Science and Health (years later retitled Science and Health with Key to the Scriptures), which she called the textbook of Christian Science. The first publication run was one thousand copies, which she self-published. In the final edition, she wrote "In the year 1866, I discovered the Christ Science or divine laws of Life, Truth, and Love, and named my discovery Christian Science" (p. 107). During these years she taught what she considered the science of "primitive Christianity" to at least 800 people.[46] Many of her students became healers themselves. The last 100 pages of Science and Health (chapter entitled "Fruitage") contains testimonies of people who claimed to have been healed by reading her book. She made numerous revisions to her book from the time of its first publication until shortly before her death.

Mary founded the Christian Science church in 1879. She devoted the rest of her life to helping it grow, writing its bylaws, The Manual of The Mother Church, and revising Science and Health.

Today, the headquarters of the Christian Science Church are in Boston, Massachusetts, and local “branch churches” can be found throughout the world—all holding weekly Sunday services using the same Bible Lesson, as well as mid-week meetings where members of the congregation publicly share how they’ve experienced healing through their practice of Christian Science.

Mary Morse Baker was born 16 July 1821, at Bow, Merrimack County, New Hampshire on the family farm. She was the youngest child of Mark Baker and Abigail Barnard Ambrose Baker. The farm was not only home to her family but also Mark's Mother Mary Ann McNeil Moore (Baker). Mark would have grown up there and I believe his Mother also grew up there as she and her husband inherited it from her parents. Census records for 1830 and 1840 show her living with her parents. Her childhood was apparently a good one even though she was frequently ill. She was unable to attend regular school due to her health so her classically educated brother, Albert, was her teacher. The year she was 10, her older brother Samuel Dow Baker married Eliza Ann Glover on 20 March 1832. Eliza's brother George was at the wedding and met Mary at that time. Apparently he was quite taken with the little girl because he told her that he was going to come back and marry her when she was old enough. Eleven years later George kept his word and came back to marry her. They were married 12 December 1843 in her parents home at Bow. Shortly after the wedding they returned by boat to South Carolina where his business was located. Mary became pregnant very quickly. They lived in Charleston, South Carolina for awhile and had gone to a job in Wilmington, North Carolina when disaster struck the young couple. George became ill with one of the fevers that plagued oceanside communities (many have said yellow fever but I have not seen a doctor's note to that effect). He died on 27 June 1844; 3 months before his son was born. George was a Mason and their credit they helped the young widow by making sure that he received a proper burial. They then collected funds so that she could return to New Hampshire to await the birth of her child. Mary returned to her parent's home in New Hampshire and gave birth to a baby boy on 12 September 1844. She named him George Washington Glover II. Mary struggled with illness and keeping up with a busy toddler must have been trying. George was very intelligent because Mary had taught him to read at about the age of 4. Tragedy struck again when Mary's Mother Abigail passed away on 21 November 1849 . This was in the house they had moved to at Tilton, New Hampshire. Mark Baker must not have like being a widower because a year later he married Elizabeth Patterson Duncan in Rockingham County, New Hampshire. Things started to really unravel for Mary at this time. She was still having health problems and her little boy was way too full of energy for his Grandpa and his new wife. Mark and Elizabeth decided that since Mary was unable to care for her son he needed to live somewhere where he could be cared for. It was decided that Mahala Sanborn Cheney (a former nurse for the Baker family) and her husband Russell Cheney would take the boy for a monthly payment. While not ideal the situation was workable for Mary since she could still easily visit George; until Russell decided to go to Minnesota Territory. Unfortunately both Mother and Son were told something had happened to the other one, so for many years they did not communicate. In the meantime Mary married Daniel Patterson (an itinerant dentist) on 21 June 1853. Daniel promised on their wedding day that he would adopt young George , a promise he never kept. We see Mary and Daniel living in Rumney, New Hampshire in 1860 . Sadly Daniel abandoned Mary, in 1873 she obtained a divorce from him due to abandonment. She had also come to believe in the absolute rightness of starting the Christian Science Faith so was working on that through a series of lectures. In the meantime George finally got to a point that he had simply had enough of Russell Cheney. Accounts that I have read stated that he was concerned for Mahala but Russell's treatment of him was too much. He ran away from their farm, worked for some other local farms for awhile and joined the Wisconsin 8th , a Union force in the Civil War. Somehow Mary and George found out that both were alive and communicated during the Civil War and were able to reawaken their parent child relationship. When the War was over George went back to Minnesota, was a successful inventor for a short time and ended up moving Fargo, North Dakota Territory, got married, and he was said to have been a deputy sheriff. He eventually pioneered in the Black Hills of South Dakota Territory. All this time keeping in close contact with Mary. Mary married Asa Gilbert Eddy in 1877. Asa had been one of her followers when the met and married. Unfortunately Asa died 3 June 1882. Mary was pleased with the acceptance of the Christian Science Faith even though there were many trials. George traveled to New Hampshire many times to stay with and visit his Mother. May times he would leave his wife, Ellen and the children in the Black Hills while he would go back east. Unfortunately there was a law suit called the Next Friends Suit, basically brought by George Glover and others against Calvin Frye and others in the Christian Science church, basically it was to secure an accounting of the property of the founder the lawsuit ended 21 August 1907. It was written up in all the major papers, so if you're curious it's all online. Mary lived in or near Boston, Massachusetts for the rest of her life, the beloved Mother and Grandmother of her family and the beloved matriarch of the Christian Science Church. Mary passed away 3 December 1910 at Chestnut Hill, Massachusetts and is buried at Mount Auburn Cemetery, Cambridge, Middlesex, Massachusetts.

book: "The Clan McNeil -the clan Nial of Scotland 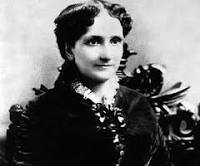 Leave a message for others who see this profile.
There are no comments yet.
Login to post a comment.
K E
Mrs.) MARY [MORSE] BAKER (GLOVER) (PATTERSON) EDDY, - founder of Christian Science
posted May 08, 2014 by K E