Elbert Newton Baker was born December 12, 1880, in Arkansas into a large extended family. By the 1900 census, they were living in Bell County, Texas, where E. N. appears as a wage earner in the household of his uncle and his new wife. (Dora’s mother passed away in 1898.). He married his “double first cousin” Dora Catherine Baker in 1902 in Bell County, Texas. Their mothers were Williams sisters and their fathers were Baker brothers. Both families were large in both their generation and the previous, and often intermarried between the Bakers, the Williams, and the Treats.

E.N. and Dora had a small store in Troy, Bell County, Texas, and probably also farmed cotton. After bearing 3 boys over the years, Dora died the day after giving birth to the youngest, named Elbert after his father. The story passed down to generations was that she died in the Great Spanish Flu Epidemic of 1919, so it was probably complications of both. I have been unable to locate her death certificate. Father and 3 sons relied on extended family to carry on.

By 1926 they had moved to Abilene. In October, tragedy struck again on a Friday afternoon when 7-year old Bert was struck by a car and killed while walking home after school. Funeral was held in Abilene and death certificate says body was to be transported home to Troy, Bell County by train, presumably to be buried by his mother. Unfortunately, I can find no further record.

By 1928, when they appear in the Abilene City Directory, E.N. married the young widow of one of his many first cousins. (Vera was a Williams herself, but I am at a loss to find out how she connected to first husband. Vera was born in Chicago to a Welsh immigrant father. I have no idea how she went from Chicago to Arkansas in 1916. The young widow’s mother was a Baker sister of both Dora & E.N.’s fathers, tho she had married a Reece.) Vera’s first husband died of the Spanish Flu, leaving her pregnant and relying on his family. Vera was much younger, and E.N. raised Geraldine as his own. (She used Reece and Baker interchangeably until she married.) Jean was born in 1930, same age as E.N.’s grandchildren. E.N. And Vera continued to live around Abilene and Lubbock as they were cotton farmers to the end. E.N. passed away in 1966, and Vera in 1985. They are buried together in Abilene, close to his 2nd son and wife (my grandparents.) As most of the extended family, they were active members of the Church of Christ and he was still serving as an elder for the Idalou congration (Lubbock county) when he passed away. The family legacy is deep.

Is E. N. your ancestor? Please don't go away!

ask our community of genealogists a question.
Sponsored Search by Ancestry.com
DNA Connections
It may be possible to confirm family relationships with E. N. by comparing test results with other carriers of his Y-chromosome or his mother's mitochondrial DNA. However, there are no known yDNA or mtDNA test-takers in his direct paternal or maternal line. It is likely that these autosomal DNA test-takers will share DNA with E. N.: 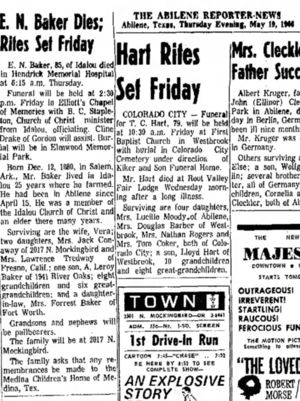 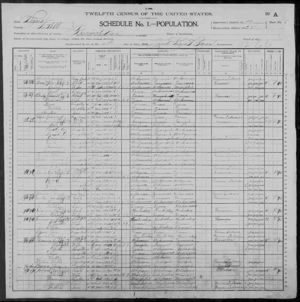 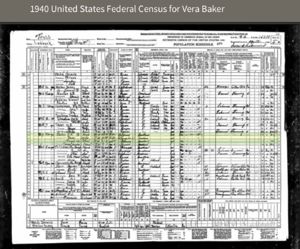