Thomas Balcomb aka Crittenden
Born about 12 May 1818 in Brede, Sussex, England, United Kingdom

Thomas Balcomb was born in Sussex on 12 May 1818, the illegitimate son of Thomas Balcomb & Hannah Crittenden. He was baptised as Thomas Crittenden on 14 June 1818 at Brede, Sussex.[1] [2]

At the age of 19 years he was converted to God and immediately joined the Wesleyan church.[2][1]

Thomas Balcomb married Alice Whiteman in Peasmarsh, Sussex on 13 April 1839.[3][4] They immigrated from England to Australia on 27 September 1839.[1] They had the following children:

They initially settled in Oberon, NSW however the severity of the Oberon climate resulted in them moving to O'Connell Plains, NSW.[1] His wife Alice died there on 30 April 1854[7]

Thomas Balcomb married Elizabeth Bailey (nee Enright) at Bathurst, NSW on 5 March 1855. Witnesses were William & Elizabeth Hall of Macquarie Plains.[8] Both were widows.[9] The children of their marriage were:

After dwelling at O'Connell Plains for some time, they moved to Cranbury on 27 January 1876. Thomas and Elizabeth were heavily involved in the Cranbury Church and during its construction, the trustees honoured his worth and work in the community by getting him to lay the foundation stones.[1]

Speech given by Winifred Scoble (granddaughter) at the Balcomb family reunion at 'Sussex' 14/8/1976:

We are here today to pay tribute to the memory of Thomas and Elizabeth Balcomb. Thomas Balcomb was born in Sussex, England on 24th May 1819. He was just one year older than the late Queen Victoria and very proud of the fact that he was born on her birthday. In 1839 he came out to NSW. He first settled in Oberon. He married Alice Whiteman and they had three daughters: Sarah, Hannah and Alice. Alice died at 15 years of age and his wife died also about this time. Later, he married Mrs Elizabeth Bailey who was a widow with two children: William and Jane. They lived at O'Connell Plains and had six children named Thomas, Miriam, Alice, Albert, Lillah and Frances. Hannah Balcomb married George Starr and had four sons and two daughters. Sarah married Robert Gransden and had six sons and three daughters. William Bailey married Eliza Bellamy and Jane Bailey married George Stapley. Thomas Balcomb was never wealthy and used to help out by mending boots and shoes. Grandma used to sell homemade butter and hen eggs - she would ride into Bathurst to sell these goods.

On the night that Thomas was born there was a bad storm causing the wreck of the ship "Dunbar" off Sydney Heads leaving only one survivor. The storm also blew the roof off their home. There is a photo of Minnie Balcomb taken on the verandah of this home in today's collection.

In the year 1876, after Hannah and Sarah married, Thomas Balcomb and family came here to "Sussex" to live. They were a Christian family and used to either hold a service of worship in their home or walk down to Toogong where a Methodist minister would come from Molong. This was before Barragan Hall was built.

They grew wheat and had a few sheep. One year they harvested only one bag of wheat which they took to Cudal to be ground into flout. Grandfather planted Kentish cherries around a small paddock or orchard and they were the only fruit we would get in my childhood days.

The home at "Sussex" has four rooms and a kitchen with a mud floor. Outside there was a brick and mud oven in which the bread was made.

Grandma was an excellent cook- her buns, brownies pound cakes and plum puddings were perfection. She catered for her three daughter's weddings making the wedding cakes. If she did not have the right number of tins for the wedding cakes, she would sew several thicknesses of brown paper and make the sizes she needed.

Both Grandfather and Grandmother were good walkers. They thought nothing of walking from here to "Macquarie" and then around by our place "The Cedars" and then home.

Their eldest daughter Miriam married Iram Nash, they had a family of seven children. Thomas Balcomb Junior married Annie Poole and had two daughters and one son. Alice married Herbert Nash and had a family of eight children. Lillah married Joshua Nash and had a family of three girls. Albert married Maryanne Thomas and reared a family of five sons and two daughters. The Nash and Balcomb families are very closely linked. Grandma was asked at Lillah's wedding "If you had three more girls could you find husbands for them?" Her reply, "Yes, if there were three more Nash boys." All the daughters were married at Barragan Hall.

Thomas Balcomb built a home when he was married and he and Granfather used to conduct Sunday School in it. The Loomes, Sharp, Wren and Swansbra families as well as the Nash and Balcomb families used to attend. Albert lived at "Sussex" and reared a family of five before he acquired "Rutherfield" from Mr Henry Thomas. Florrie and Noel were born at "Rutherford". Grandfather was past working at this stage and they used to rent part of their home to help out - no pension in those days.

Mr & Mrs May, school teachers, were the first tenants and later Mr & Mrs R Baker and son were still at "Sussex" when Gran died. They were very proud people when the Methodist Church was built. It had four corner stones instead of a foundation stone and Grandfather was asked to lay one. My parents put some notes in an old purse for him to put on the stone, and in his excitement he put the old purse (much to mother's disgust) on the stone. He only lived four years after that. He would be pleased to see present church and hall. He used to always attend church and did so until three Sundays before he died. During the children's address he used to answer the questions put to the children. He was staying at "Macquarie" when he took ill and asked to go home to "Sussex" to die. With help from Mr Whitmee they made an ambulance out of the buggy and brought him home to "Sussex". When asked if he was in any pain, he would answer, "No, I'm just going home." And so he passed away peacefully on 6th February, 1906.

Grandma was a wonderful wife. In her younger days she used to ride to Cudal with eggs and butter in a butcher's basket and bring home the groceries. On one occasion when she was returning home she found Oakey Creek in flood and had to return to Cudal and go home via Toogong. Her wonderful Christian life was an influence in this district. They have left a good heritage of men and women. Two grandsons were Presbyterian Ministers - his son and grandsons local preachers and Sunday School teachers, a granddaughter a great lady of the parsonage. Several grandsons served in the First World War. There are local preachers and Sunday School teachers in the next generation. And so we are here to pay tribute to two of God's great Christian people. The late Roy Balcomb MBE became the next owner of "Sussex" and you cn appreciate how he worked and made it what you see. The home was built in 1915 and the bricks were made on the property. After Thomas Balcomb died, more land had been acquired and Roy, Horace and Ira used to come and stay in the old home and plant and harvest crops.

The death certificate indicates that Thomas was born in Ryde, County Kent, England. This is likely Rye district near the border of Kent.

Adapted from: History of Toogong, Dorothy Balcomb, 1972: The Balcomb name, with or without an 'e', has been associated with Toogong since 1876 when Thomas Balcomb at the age of 58, selected "Sussex", 3 1/2 miles from Toogong.

Occupation at time of baptisim of Sarah- Shoemaker.

Thomas, Alice and Sarah were living a Maquarie Plain at the time of Sarah's birth. 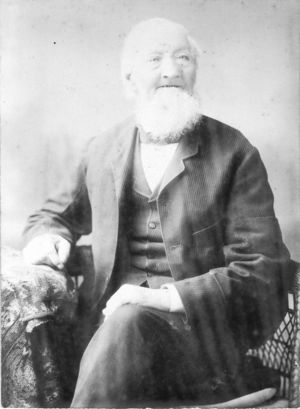 Thomas is 27 degrees from Danielle Liard, 24 degrees from Jack London and 20 degrees from Henry VIII of England on our single family tree. Login to find your connection.