Although not listed in Anderson's Puritan Great Migration, there is evidence that Henry Baldwin arrived during the timeframe. According to Anderson, "The 13 of 3 month 1640 [13 April] was the date that the General Court granted the petition for the two-mile square addition to the town of Charleston, clearly the event that the settlers of Woburn consider to be the founding date for their town. Below these orders is a listing of thirty-two men who subscribed to the founding document of the town of Woburn in the same order in which they appear on the list. Twenty of the thirty-two resided in Charleston prior to coming to Woburn, including Edward Johnson, Edward Converse, John Mousall, Ezekiel Richardson, Samuel Richardson, Thomas Richardson, William Learned, James Thomas, John Wright, Michael Bacon, John Sears, John Wyman, Francis Wyman, Mr. Thomas Graves, Nicholas Davis, Nicholas Trerice, John Carter, James Converse, Daniel Bacon, Edward Winn. The next group of original Woburn settlers consists of ten men with no certain prior record in New England, may have come straight from England to Woburn, being participants in the final stages of the migration, or resided in Charleston without leaving a record, including Henry Beldin [Anderson corrects to Baldwin on page 473], Francis Kendall, John Teed [sic], Henry Tottingham, Richard Lowden, William Greene, Benjamin Butterfield, Henry Jefts, James Parker, John Russell, James Britton and Thomas Fuller.[1]

Possible Migration with Father and Siblings

In his Notes on the Baldwin Family, C. C. Baldwin indicates that Richard Baldwin, along with daughter Jane were known to have been in Braintree, Massachusetts in 1637 and it has been surmised that Richard may be the father to Henry of Woburn and John of Billerica. Richard, brother to the immigrant Sylvester, would have likely returned to England himself as his wife, Phillipa, was buried in Aston Clinton on 30 July 1641. Deacon Henry of Woburn was a witness to his brother John Baldwin of Billerica's will in 1686 reinforcing this family relationship.[2]

Several sources incorrectly suggest the birth location for Henry Baldwin of Woburn as Devonshire, England.[3][4] Baldwin suggests that this error in birth location may have occurred because "the name 'Baldwin' was there an old one--the first Earl of Devonshire, under William the Conqueror, having that name." He also indicates that the arms for the (Aston Clinton) Baldwins do not belong to the Devonshire Baldwins.[5]

Henry Baldwin of Woburn was born in Buckinghamshire, England.

Henry Baldwin, son of Richard Baldwin and Phillipa Corbman, was baptized on 8 February 1623 at St Leonard's Parish of Aston-Clinton, near Wendover, Buckinghamshire, England.[6][7] Henry emigrated to Charlestown, Massachusetts, by 1640 based on his listing as the 21st of 32 original signers to the founding document for the Woburn town orders on 13 April in that year.[1]

Henry married Phebe Richardson, daughter of Ezekiel and Susannah (Unknown) Richardson on 1 November 1649 and settled at 'New Bridge', or North Woburn.[8] They had eleven children, all born in Woburn:[9][5][3]

Will and Probate Records

Henry wrote his will on 9 February 1697/8 and it was admitted to Probate on 4 April 1698 where he is called Deacon Henry.[13] His original will was admitted to probate on 4 April 1698. In it, Henry makes bequests to his 'well beloved wife', Phebe, his sons Henry, Daniel, Timothy and Benjamin, daughter and son-in-law, Susannah and Israel Walker, daughter and son-in-law, Phebe and Samuel Richardson and their son Zachariah Richardson, unmarried daughters, Abagail [sic] and Ruth, grandson Israel Walker if he resides with his uncle, Henry Baldwin, until the 'one and twentieth year of his age be expired,' and all of his grandchildren born of his own natural children as a token of his love. Henry appointed his 'Dear and loving wife' as Executrix, son Henry as Executor, his pastor, Jabez Fox and friend Lieut. Josias Converse as overseers of his will.[14]

The Baldwin House, also known as the Loammi Baldwin Mansion, located in North Woburn, was begun by Henry Baldwin in 1661, making it the oldest extant home in Woburn. It was added to the National Register of Historic Places on 7 October 1974. The home was moved from its original location adjacent to the Middlesex Canal to make way for urban expansion to its current location in 1971.[15] The home was owned, expanded upon and occupied by six generations of Baldwins, from 1661 until the 1930s. Henry's great grandson, Col. Loammi Baldwin, greatly expanded the home in the Palladian style, which garnered the name, 'The Baldwin Mansion.' The north chimney, installed by George R. Baldwin, is said to be the first 'single flue chimney' made in the country. The appearance of the home, now a restaurant, looks much the same now as it did in 1820.[4] Several photographs of the exterior and interior of the 'Colonel Loammi Baldwin Mansion' taken by photographer Arthur C. Haskell in 1936, as well as more recent color photographs of the home-cum-restaurant are available at the wikimedia link.[16] 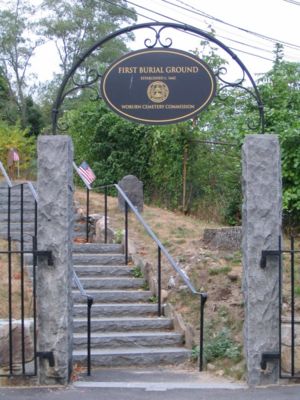 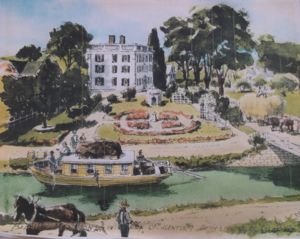 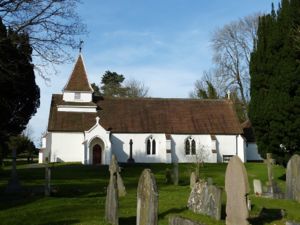 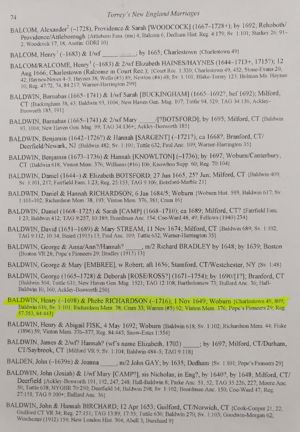 This is a follow up message to determine if you have any issues with my adding biographical information, sources and photos to Henry 'of Woburn' Baldwin's profile. I will also send an email and leave a note on your site. Thank you!

Carol Baldwin PhD RN
Hi Katie Pyle, I am writing to see if you have any issues with my updating/clarifying information on Henry "of Woburn" Baldwin. I have some additional information and sources. I also have more relevant photos/visuals to add as I have been to Woburn twice in the past 3 years and was able to take photos of Baldwin family items that were on view at the Benjamin Thompson (Count Rumford) home. I got a first hand look as I was solo on the tour being a direct 7th great-granddaughter of Henry and Phebe (Richardson) Baldwin. Look forward to hearing from you! Carol
posted Oct 26, 2019 by Carol Baldwin PhD RN
Ellen Gustafson
Seems Henry arrived in Charlestown in 1640. Most of the sourcing for the children and the notes section is unreliable.
posted Sep 14, 2019 by Ellen Gustafson
Dina Grozev
There are two Benjamin Baldwins attached to Henry as sons. The Benjamin Baldwin who was born in Connecticut and died in Newark should be removed.

His mother was earlier removed as a wife of Henry as well.

Benjamin Baldwin of Connecticut and Newark was the son of Joseph Baldwin and Hannah Whitlock.

Carol Baldwin PhD RN
To my knowledge and to sources, this Henry (of Woburn) Baldwin was married once, to Phebe (Richardson) Baldwin. I believe Hannah (Whitlock) Baldwin should be removed from this profile as there is no evidence that Henry and Hannah were ever married. This could be a data entry error. Thank you, Carol (Baldwin-3428)
posted May 27, 2019 by Carol Baldwin PhD RN

John Kingman
Baldwin-5 'Confirmed with DNA' was changed to 'Confident'. Please do not mark as confirmed with DNA without providing the required DNA confirmation statement.

In order to mark a parent as 'confirmed with DNA,' you need to include the necessary DNA test matching information in child's the profile for at least two testers, including where the DNA tests were matched, the amount of shared DNA, and the estimated relationships. Also include the MRCA and how the testers relate to each other.

You can see what is required under the DNA Confirmation (click) topic of WikiTree's Help pages, as well as examples.

John Kingman, a Coordinator with the DNA Project

Mags Gaulden
Regarding the proposed merge - What about the death date discrepancy?
posted Feb 20, 2014 by Mags Gaulden