Short stop for the New york Giants. And Captain in the pennant- winningyears of 1921-1922-1923. the Giants won the world series in 1922-23. Hewent on to mangage the Boston Braves from 1924-27 and then wasplayer-coach in 1930-31. He returned to sioux City which he called homeand managed the sioux city cowboys of the Western League in 1936. Baseball Hall of Famer. Dave 'Beauty' Bancroft.

Filed for his social security number at age 50.

Back of Daves Fleer card reads:

Bancroft is another in the long line of great National League shortstops,playing in almost 2,000 games in the senior circuit. He broke into thebig leagues in 1915 with the Phillies and later played for the Giants,Braves and Dodgers. he also was the Boston Braves' manager from 1924 to1927. He batted over .300 five times but was never a long ball hitter. Helater also coached for the Giants.

Hall of Fame Major League Baseball Player. He played Major League baseball as a shortstop for sixteen seasons (1915 to 1930) with the Philadelphia Phillies, New York Giants, Boston Braves, and Brooklyn Dodgers. Possibly the best National League shortstop of his era, he had all the stellar defensive skills a team needed – quick hands, long range and a mental speed that augmented his physical talent. That, coupled with a good ability at the plate, helped him get into 4 World Series. In 1915, looking for a replacement for longtime shortstop Mickey Doolan (who made the jump to Baltimore of the Federal League), the Phillies purchased Dave Bancroft from the Pacific League's Portland team. He immediately became entrenched as the starting shortstop on a team that included Grover Cleveland Alexander, Gavvy Cravath and Fred Luderus, and was an integral part of their Pennant winning season (he gained his nickname by shouting "Beauty" whenever his pitcher made a particularly good pitch). He batted .254 in the regular season, and even hit better in the subsequent World Series against the Boston Red Sox, hitting .294, second only to Luderus among Phillies starting players. Despite his excellent defense, the Phillies lost their first Series appearance 4 Games to 1. His career now well underway, he was fixed in the shortstop spot for the next 5 years, helping the Phillies to two second place finishes, and increasing his reputation with excellent defense. As the decade drew to a close, the Phillies fell from an elite team to a cellar dwelling one. Owner William Baker, instituting a policy of selling star players for cash to keep up with his gambling debts, traded Beauty Bancroft to the Giants for the aging and once stellar shortstop Art Fletcher, pitcher Bill Hubbell, and $100,000 in cash on June 8, 1920. For New York, it was an incredibly lopsided deal, for they acquired him just when he was reaching his peak. Named the team Captain in 1921, in 1922 he tied the record for most chances handled for a year with 1,045 – a record that still stands today. He became an excellent leadoff man was well, batting over .300 from 1921 to 1923 (with a career high of .321 in 1922). His three full years with the Giants saw them win the National League Pennant all three years. His Giants won in 1921 and 1922 over the Babe Ruth-led New York Yankees (their first Championships since 1905), and lost the third Series against the Yanks. In November 1923 the Giants traded him to the Braves with Casey Stengel for Billy Southworth and one-time Phillies teammate pitcher Joe Oeschger to make way for an up-and-coming shortstop (and future Hall of Famer) Travis Jackson. Playing with Boston from 1923 to 1927, he managed the team as well, but despite his continued defensive mastery (he led all shortstops in Fielding Percentage in 1925) the Braves never left the Second Division. Always a fiery leader and player, he got into a fight with the Pirates catcher Earl Smith on June 17, 1927 that resulted in Bancroft being carted unconscious from the field. After resigning as the Braves manager after the 1927 season, he joined the Dodgers for the next two years. In 1930 he played 10 games for the Giants before retiring to become a coach. In 1971 he was elected to the Baseball Hall of Fame by the Veterans Committee. His career totals were 1, 913 Games Played, 2,004 Hits, 32 Home Runs, 591 RBIs and a career .279 Batting Average. His 11,844 total chances are sixth on the All-Time list for shortstops, and his Average Putouts per Game (2.5) is first. (bio by: Russ Dodge) 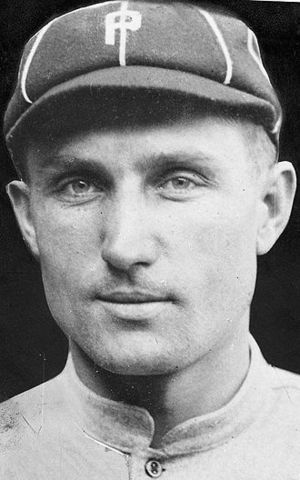