Frederick Banting MC is/was a significant Ontarian .
Sir Frederick Banting KBE, MC, FRS, FRSC, was the co-discoverer of insulin, a Nobel laureate, a medical scientist, and a painter. Following the discovery of insulin, he was appointed Canada's first professor of medical research at the University of Toronto.

The youngest of the six children of William Banting and Margaret Grant, Banting grew up on a farm near Alliston, Ontario. In 1915, before graduating from University of Toronto's Faculty of Medicine, he signed up with the Canadian Army Medical Corps during World War One.[1] After graduating in 1916, he took up duties as a surgeon in a Canadian military hospital in England before being sent to France in June 1918. Captain Banting was wounded during the attack on Cambrai on September 28 and was awarded the Military Cross for valor.[2]

In 1921 he and C.H. Best began research into a cure for diabetes at the University of Toronto. Their experiments led to the discovery of insulin. Banting was awarded the Nobel Prize for Physiology and Medicine in 1923, the youngest man to receive the Nobel in medicine. He was knighted in 1934.

Sponsored Search by Ancestry.com
DNA
No known carriers of Frederick's DNA have taken a DNA test. 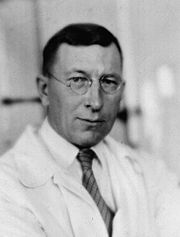 Leave a message for others who see this profile.
There are no comments yet.
Login to post a comment.
Elaine (Truslove) James
Hello Profile Managers, I used to live in Allison, where Sir Fredrick Banting is from. I am not sure if you know or are interested, but there is a High School there named in his honour. Banting Memorial High School. It is located at, 203 Victoria Street East, Alliston, Ontario, Canada. They actually teach the students all about Sir Banting and his insulin discovery. I just thought I would mention it, Incase your interested.
posted Apr 29, 2021 by Elaine (Truslove) James
Deborah (Thomas) Norling
Elaine, Yes, Very interested. Thank you so much!
posted Apr 30, 2021 by Deborah (Thomas) Norling

We are featuring Frederick alongside Louis Pasteur, the Example Profile of the Week in the Connection Finder, on April 28, with the theme of medical innovators. Between now and then is a good time to take a look at the sources and biography to see if there are updates and improvements that need made, especially those that will bring it up to WikiTree Style Guide standards. We know it's short notice, so don't fret too much. Just do what you can. A Team member will check on the profile the day before the Connection Finder is updated and make last minute style-guide changes as necessary.