According to The Great Migration Directory: Immigrants to New England, 1620–1640 the parents and origins of this person are not known.[1]

Earlier treatments of John Barker stated his was son of Sir Robert Baker and Catherine Ackworth, giving him descendancy from Magna Carta Surety barons Saher de Quincy and Richard de Clare..[3] However, no evidence has been found to support this.

Apparently, though, there is DNA evidence to suggest some sort of relationship. See below.

We do know he was brother of Robert Barker who came to Plymouth in 1632.[4]

He married Anne Williams between 1632 & 1638 in Scituate, Massachusetts.

He died in the town of Jones in Plymouth Colony.

He was memorialized on a ceneotaph of First Settlers of Marshfield at Old Winslow Cemetery.

He drowned at his ferry over the Jones River.

He arrived with his brother Robert to the Plymouth colony in about 1628-30. According to Barker, he and his brother "set out from Plymouth colony to make homes for themselves, going by boat along the coast until they came to the North River (near Cape Cod) sailing down this, they reached what is now part of Pembroke, Mass. known as Herringbrook.

Here they camped for the winter and the following spring ground was broken and the house built.

John lived in that part of Plymouth which was set off in 1637 as Duxbury. He was a brickmason and agreed to teach Wm. Barden the trade of a bricklayer, as the end of his time giving him (Wm) â€˜20 bushels of corn, 2 suits of apparel and an ewe goat's lamb.'

In 1628 he moved to Marshfield, Mass. and bought a ferry at the Jones River, where he covenanted to keep it â€˜at two pence a person until a bridge is built.' In 1643 he was a member of the Marshfield Military Co. under Lt. Nathaniel Thomas; in 1648, he had some disagreement with a neighbor about a buildary line. The court requested John Alden and Miles Standish to â€˜set at rights such differences as are betwixt them'" (231).

There is a John Barker (UK) created that shows his parents as Catherine (Acworth) Barker and Robert Barker. It is possible that John Barker (US) and John Barker (UK) are the same person but the relationship is not proven. This note has been added to acknowledge the uncertainty and to prevent further confusion. If it turns out in the future that these two can be merged, sobeit! 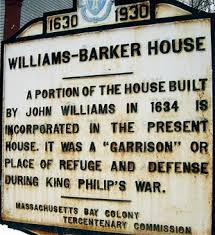 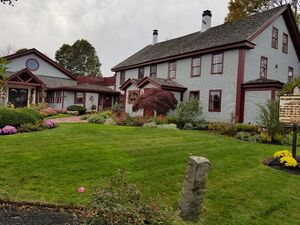 Joe Cochoit
Robert barker and Catherine Ackworth had sons Robert and John, but there is no reason to think they are the same as the immigrants. So, this identification is not accepted. Is there any new data?
posted Jun 15, 2021 by Joe Cochoit

Ian Acworth
I would say that there is no reason to Not think they are related to the immigrants either. Surely this is a strong possibility, if not actually proven.

What data would be considered acceptible to prove the relationship? They probably lost their boarding passes! Seriously though, how do we make the link back through 400 years? Or is this simply not possible?

You ask about new data - the detailed biography of Catherine's father George is new to this discussion. So a better appreciation of the Shropshire Visitation entry of 1623 is now possible.

I would agree that the early versions that suggested Catherine was some sort of Lady with Royal origins is patently untrue. I have seen a "Lady Catherine Acworth of Southwell Kent" in some profiles. Southwell is not in Kent and Catherine was not a Lady. But it seems that Catherine may have been born in Kent and her father was a prebendary at Southwell Minster in Nottinghamshire for a small period. Out of such scraps - mythologies grow!

Anne B
I don't know a lot about DNA either but. They didn't do a DNA test on Sir Robert Barker. So what I see is a person who tested his DNA, and then submitted his faulty pedigree. I think, once again we should disconnect. His brother Robert is disconnected. Even the Geni profile notes that they have disconnected from the alleged parents.
posted Dec 09, 2017 by Anne B

Jillaine Smith
But there is now a claim of dna connection. The link provided though is iffy. And I dont know enough about dna to judge.
posted Nov 17, 2017 by Jillaine Smith

Anne B
Objections to disconnecting these unproven parents?
posted Nov 16, 2017 by Anne B