Robert Barker
Born about 1616 in England

Earlier treatment of John Barker stated he was son of Sir Robert Baker see: Elizabeth Frye Barker, Barker Genealogy (New York 1927) 231. However, no evidence has been found to support this. Barker is a very common name.

Barker gives a further history of the family back to England; I only include his father's generation, because his brother John also immigrated at about the same date Robert did, in 1628-30. Both were early settlers at Plymouth, Massachusetts.

From THE DESCENDANTS OF ROBERT BARKER OF DUXBURY.

The first mention of Robert Barker is found in the Colonial Records under the date Jan. 20, 1632: "Robert Barker, servt. of John Thorp, complayned of his Mr. for want of clothes. The complaint being found just, it was ordered that Thorp should either foorthwith apparell him. or else make over his time to some other that was aide to provide for him." He was later bound to William Palmer as a carpenter's apprentice, and his time was out Apr. 1. 1637. This date probably marks the attainment of his majority, so that we may suppose him to have been born in 1616. In 1641 he with others, bought from Jonathan, son of Elder Brewster, a ferry and one hundred acres of land at Marshfield, and in 1643 he was a member of the military company in that town under Lieut. Nathaniel Thomas. He held the office of surveyor in Marshfield in 1645 and 1648, constable in 1646, and was admitted freeman in 1654. In 1648 he bought a house and land for 45 shillings, having been licensed in 1646 to keep an inn to retail wine. Although he did not entirely give up his interests in Marshfield, where he kept his liquor license until 1666 and was grandjuryman in 1669, he seems to have removed to Duxbury about 1650-1655, for Aug. 2, 1653, he desired the laying out of lands at Namasskeeset (v. p. 7). There is a tradition that he came with Dolor Davis and a negro, and stayed the first winter in a dug-out. He appears as surveyor of Duxbury from 1654 to 1656, in 1672, 1677, 1679. and grandjuryman 1684-5. The court at Plymouth. Mar. 5, 1667-8. granted him 9 1-2 acres of land at Robinson's Creek, North River, Duxbury, which was perhaps the nucleus of his estate. He prospered in his new home, and left at his deadi. in [691, ±142, is. [id. He married Lucy Williams, who died between Mar. 7. 1681-2, when she was fined for selling cider to the Indian-, and Feb. 18. 1689, the date of her husband's will. The inventory of his estate was taken Mar. 15, 1 691/2.

There is a Robert Barker (UK) created that shows his parents as Catherine (Acworth) Barker and Robert Barker. It is possible that Robert Barker (US) and Robert Barker (UK) are the same person but the relationship is not proven and the estimates of birth date differ by approximatley 15 years. This note has been added to acknowledge the uncertainty and to prevent further confusion. If it turns out in the future that these two can be merged, sobeit! 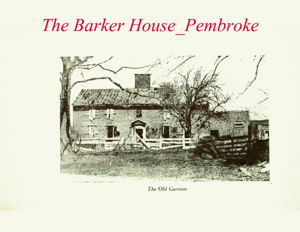 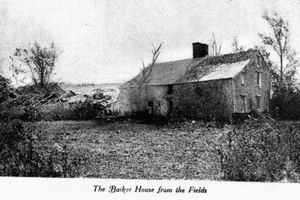 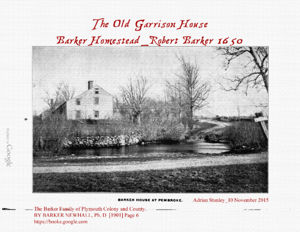 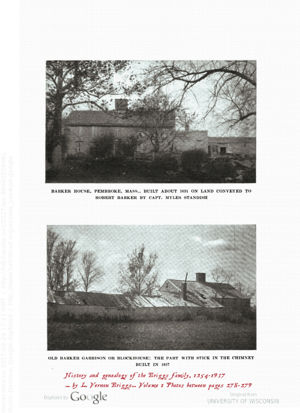 Seems that John and Robert were sons of Catherine Acworth (Acworth-322) and Robert Barker - son of George Barker.

Note this is Barker and not Baker and that the Barkers are all from Shropshire, England.

There is much more information available on Catherine Acworth than previously

Seems someone has found parents for John & Robert, a Robert Barker of Kent.

Anne B
The problem with adding his brother (at the moment) is that John still has unproven parents attached. Attaching him will attach them also. I've left a note on John's profile. There is also the fact that the only way to attach him is to create an Unknown Barker, father of them both, which it is ok to do.
posted Nov 16, 2017 by Anne B