Daughter of Samuel Barker and [mother unknown]
Sister of Mary Barker
Wife of Edward Winslow Jr. — married after 12 May 1618 in Leiden, Zuid-Holland, Nederland

Elizabeth Barker is notable as a Mayflower passenger, and the first wife of Gov. Edward Winslow.

Proof of her English origins has recently been published in the NEHGR.[1] She was from Chattisham, Suffolk, England, the daughter of Samuel Barker.

Elizabeth's birth is estimted about 1593, probably in Chattisham, Essex, England. She was an underage minor (under 14) when she applied to the Chattisham manorial court for admittance to her father's land on 19 September 1605. She then appears on the recusancy lists from 1608 through 1615. In 1614 she is called a Brownist.[1]

Sometime between 1615 and 1618 she removed to Leiden, Holland and joined the separatist congregation of John Robinson.[1]

Elizabeth married, in Leiden, Holland, after 12 May 1618 (banns published) Edward Winslow. She was accompanied by her cousin, Jane Pexsel or Peverel and Mary Allerton, wife of Isaac Allerton.[2][3]

In May 1618, she married Edward Winslow Jr in Leiden. She was named heir of her stepmother's estate 10 Sep 1619. Probably in late 1619, in preparation for the Mayflower voyage, she and her husband returned to Chattisham and sold the lands she inherited from her father.[1]

She traveled on the Mayflower with her husband but was among those who died during the first winter on 24 March 1620/1.[4] Edward Winslow remarried to Susanna (Jackson), widow of William White.[5]

Elizabeth the wife of Edward Winslow died 24 March 1620/21[4][6] She was subsequently interred on what is now called Cole's Hill.

She had no known children. A will written prior to the Mayflower voyage has been found in Leiden, written in Dutch. "... the honorable Elizabeth Barker, wife of Edward Winslow, born in England, living in this city of Leiden, sick of body but able to stand and walk, and in full possession of her reason, memory and understanding." She left the bulk of her estate to her husband and named also several relatives and friends, and made contingency plans should her husband or others die before her. " ... concerning all additional goods that she, the testatrix, leaves, beyond the satisfaction of the aforesaid legacies, she declares Isaac Allerton and John Carver, her chosen executors, to be universal heirs ...[7] 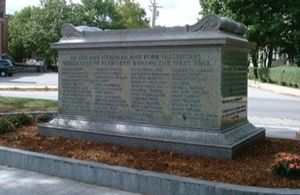 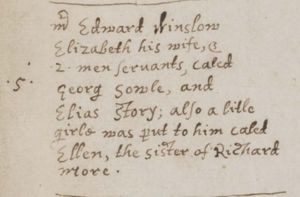 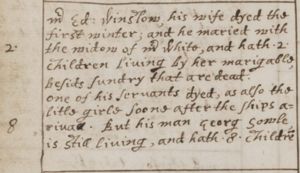