John Barrow was a member of aristocracy in England.

An English statesman and writer, John Barrow was born in the village of Dragley Beck in the parish of Ulverston in Lancashire, on the 19th of June 1764. Ulverston is the location of a memorial erected in his name in 1850. (See the page by Ulverston Town Council on The Sir John Barrow Monument)

John Barrow was an only child, and his father, Roger Barrow was a tanner in the village. He was educated in Ulverston up to the age of 13, when he left school. He excelled at mathematics, and was employed as a superintending clerk in 1765 and appears to have embarked on his first adventure overseas when he was 16 travelling with a whaling expedition to Greenland. He was also a teacher of mathematics at a private school in his 20s.

He travelled to China, attached to the Embassy, where he learned Chinese, one of several languages he was to become competent in. In 1797, Barrow accompanied Lord Macartney on a diplomatic mission, as private secretary, to the newly acquired colony of the Cape of Good Hope. He married local botanical artist Anna Maria Truter on 26 August 1799, and bought a house in 1800 in Cape Town.

Barrow returned to Britain in 1804 and was appointed Second Secretary to the Admiralty by Viscount Melville, a post which he held for about forty years. In remaining in his post through changes of government, Barrow started a trend where civil servants no longer needed to surrender their posts after political changes, but could consider their roles more permanent. John Barrow was a respected holder of his office which became known as Permanent Secretary. He was very much involved in policy and decisions involving the Royal Navy during the years of the Napoleonic Wars and after.

A baronetcy was conferred on him by Sir Robert Peel in 1835, and he became First Baronet of Ulverstone.

He was the author of numerous works and articles, and a contributor to the Encyclopedia Britannica. He was a Fellow of the Royal Society and a member of the forerunner of the National Geographic Society.

Sir John Barrow retired from public life in 1845 and died suddenly on 23 November 1848 in London, aged 84 years. His grave can be found in the burial ground of St Martin’s in the Fields, Camden Town. His parents are buried in St Mary’s Parish Churchyard in Ulverston. 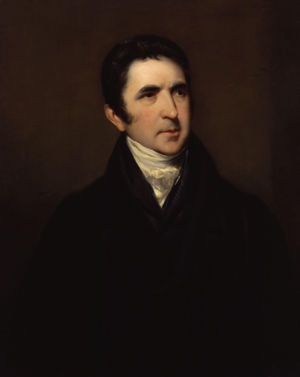 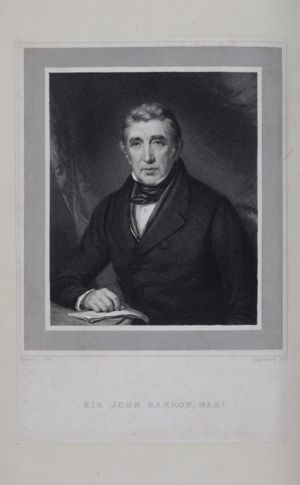