Jean Bart was born in Dunkirk in 1650 [1] to a seafaring family, the son of a sailor who has been described variously as a fisherman [2] or corsair commander. [3] He almost certainly spoke Flemish, at that time the native language in the region, and his birth name was probably Jan Baert.[4] [5] [6]

When he was young, Bart served in the Dutch navy under Admiral Michiel de Ruyter. [7] When war broke out between France and the United Provinces in 1672, he entered the French service. Since persons not of noble birth in those days couldn't obtain the rank of officer in the navy, he became captain of one of the Dunkirk privateers. In this capacity he displayed astonishing bravery, so that Louis XIV sent him on a special mission to the Mediterranean, where he gained great distinction.[8]

Unable to receive a command in the navy due to his low birth, he held an irregular sort of commission, but he had such success, however, that he became a lieutenant in 1679. He became a terror to the Dutch navy and a serious menace to the commerce of Holland. On one occasion, with six vessels, he broke through a blockading fleet, shattered a number of the enemy's ships, and convoyed a transport of grain safely into Dunkirk harbor.[6] He rose rapidly to the rank of captain and then to that of admiral. [9]

He achieved his greatest successes during the Nine Years' War (1688–1697). In 1689, in the beginning of this war he was captured by the English, together with Claude de Forbin, and taken to Plymouth. But 3 days later, they succeeded in escaping to Brittany in a rowboat, together with 20 other sailors. In 1691 he slipped through the blockade of Dunkirk, terrorizing the allied merchant fleet and burning a Scottish castle and four villages. In 1694 he achieved his greatest success in the Action of 29 June 1694, when he captured a huge convoy of Dutch grain ships, saving Paris from starvation. Jean Bart was raised into the nobility on 4 August 1694 with a peerage. In 1696 he struck another blow against the Dutch in the Battle of Dogger Bank (1696).

The Peace of Ryswick (1697) put a close to his active service.

Then he married Jacoba Tugghe on 13 October 1689. They had ten children. He signed his marriage contract, which is still on file in Dunkirk, with the name "Jan Baert".

Jean Bart died of pleurisy and is buried in the Eglise Saint-Eloi in Dunkirk.

Many anecdotes tell of the courage and bluntness of the 2.04 m tall[citation needed], uncultivated sailor, who became a popular hero of the French Navy. He captured a total of 386 ships and also sank or burned a great number more. The town of Dunkirk has honoured his memory by erecting a statue and by naming a public square after him.

ask our community of genealogists a question.
Sponsored Search by Ancestry.com
DNA
No known carriers of Jean's DNA have taken a DNA test. 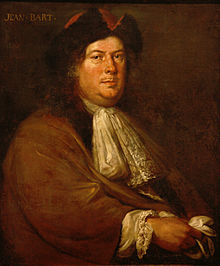 Jean is 36 degrees from Donald Howard, 31 degrees from Julia Howe and 28 degrees from Henry VIII of England on our single family tree. Login to find your connection.