Benjamin Bartlit, son of Benjamin and Hannah, was born in Duxbury, Plymouth County, Colony of Massachusetts Bay, on 17 Aug 1741. [1]

23 Oct 1764 Benjamin's parents, himself and sister Hannah, "represented to be inhabitants of Boston ... " were warned from Bridgewater. Which means they were being thrown out of town.[2]

An intention of marriage between Mr. Benjamin Barlett Jr of Bridgewater and & Mrs Susanna Hayden of Stoughton was entered 19 Mar 1766, in Stoughton, Massachusetts.[3]

Benjamin was a cooper.[4]

Benjamin Bartlett, died at Stoughton Massachusetts 31 July 1799.[3] 31 Aug 1799, widow Susanna Bartlett refuses the administration of her husband's estate and asks instead that Isaac Bartlett of Easton administer. Inventory 1 Oct 1799 showed he had 12 acres of land in Bridgewater, cooper's tools, farming utensils and livestock, and miscellaneous personal items. The inventory was valued at £430. 98s. Susanna petitions for an allowance, on the grounds that her husbands estate is not going to cover his debts, leaving her destitute. Subsequently she receives a widows one third. The estate was insufficient. The debts amounted to more than £600. The 45 pages of documents do not mention any children of the deceased.[4]

I saw one lineage saying he was from the Robert Bartlett of Plymouth, MA, who came on the Ann in 1623, but I am not yet sure of that...

this is a memorial book to the Robert Bartlett family of Plymouth, Mass.:

information on the old manor in England and the old church with the Bartlett inscriptions in Stopham, Sussex, England:

More records on Benjamin Bartlett Junior may be available offline. Schedule a free consultation with our friends at Trace.

ask our community of genealogists a question.
Sponsored Search by Ancestry.com
DNA Connections
It may be possible to confirm family relationships with Benjamin by comparing test results with other carriers of his Y-chromosome or his mother's mitochondrial DNA. However, there are no known yDNA or mtDNA test-takers in his direct paternal or maternal line. It is likely that these autosomal DNA test-takers will share DNA with Benjamin: 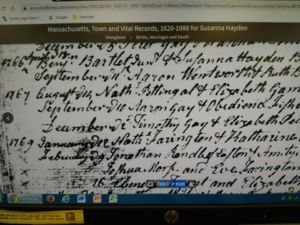 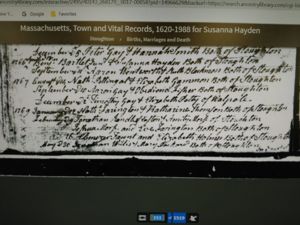 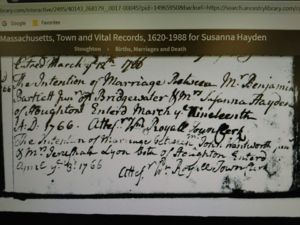 Leave a message for others who see this profile.
There are no comments yet.
Login to post a comment.
K. Anonymous
Bartlett-7431 and Bartlett-2598 appear to represent the same person because: Same name, spouse, and date of death.
posted Aug 08, 2018 by K. Anonymous