Francoise Marthe Barton was baptized on January 10, 1651 in Poiters, Vienne, France at Sainte-Opportune Parish. Her father was Jacques Philippe Barton, the secrétaire de Mgr de Villemontet and her mother was Renee Pestre of the parish of St Michel in the city of Poitiers, 86000. Vienna; Poitou-Charentes. Her baptismal record spells her last name Barthon and uses "Philippe" as her father's first name.[1][2][3] The sponsors at her baptism were Nicolas Faverot and Marthe Pestre Moreau.[3]

On July 31, 1670, at the age of 18, she arrived from LaRochelle, Charente-Maritime, Poitu-Charentes, France aboard the vessel, La Nouvelle France,[4] along with several other Filles du Roi. [5]

The King's Daughters (French: filles du roi; filles du roy) is a term used to refer to the approximately 800 young French women who immigrated to New France between 1663 and 1673 as part of a program sponsored by Louis XIV. Most were single French women and many were orphans. [5] Francoise-Marthe's father had died and that is probably why agreed to go to New France.

Francoise Marthe and Joseph Chevalier signed their marriage contract and wed on October 7, 1670 at Notre Dame in Montreal. [6]

By the time of the 1681 Census of Montreal, 37-year old Joseph and 28-year old Francoise have had five of their total thirteen children. The census records the children and their ages: Marie-10, Pierre-8, Jean-6, Jean Baptiste-4, and Elisabeth-2.[7]

Sponsored Search by Ancestry.com
DNA
No known carriers of Françoise-Marthe's DNA have taken a DNA test. 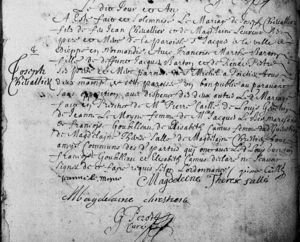 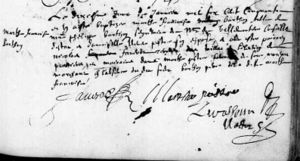