Jeremiah was 24 years old when he enlisted in the Confederate Army. He served as a Private, Company C, 27th Regiment, of the Louisiana Infantry. On June 12, 1862, he was paid bounty money in the amount of $50.00 by the army. Bounty in this amount was usually paid for getting someone else to join up or for re-enlisting for another period. As he had only been in the army for ten weeks when he was paid the bounty, it was probably given to him for getting a friend or relative to join. Jeremiah's pay was only $16.00 a month as private.

Jeremiah fought in the Battle of Vicksburg which surrendered to the Yankee Army on July 4, 1863 (Independence Day). This battle was so bloody that the city of Vicksburg did not observe Independence Day until 1945. After the surrender, Jeremiah Bass was turned over as a prisoner of war and paroled the same day. At this time, he signed a declaration not to take up arms against the United States again. He obviously broke that agreement, as he appeared on a list of prisoners reported for exchange at Shreveport, Louisiana, on April 1, 1864. Jeremiah Bass also served under General E.K. Smith, and was serving in New Orleans when the Confederacy surrendered to the Union. He was paroled at Natchitoches on June 10, 1865.

After the war, Jeremiah Bass returned to his family and began to farm.

Note NI081As per information on the "Widow's Application for Pension", filled out with information supplied by Emaline, Jeremiah enlisted in the Confederate Army in Alexandria on April 1862 as a Private. He was discharged in 1865, also in Alexandria and still a Private.
She also stated her husband died on September 5, 1891. This conflicts with the headstone at Lauel Hill Cemetery.
Headstone says Sept 3, 1891
Civil War Unit marker says Sept 13, 1891

Is Jeremiah your ancestor? Please don't go away!

ask our community of genealogists a question.
Sponsored Search by Ancestry.com
DNA Connections
It may be possible to confirm family relationships with Jeremiah by comparing test results with other carriers of his Y-chromosome or his mother's mitochondrial DNA. Y-chromosome DNA test-takers in his direct paternal line on WikiTree: It is likely that these autosomal DNA test-takers will share some percentage of DNA with Jeremiah: 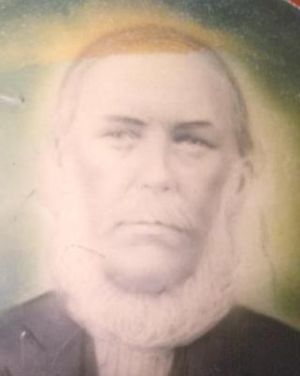